The Royal Spanish Language Academy’s Dictionary defines governance as “art or way of rule that has as goal the attainment of a durable economic, social and institutional development, promoting a healthy balance between the state, the civil society and the economic market.” 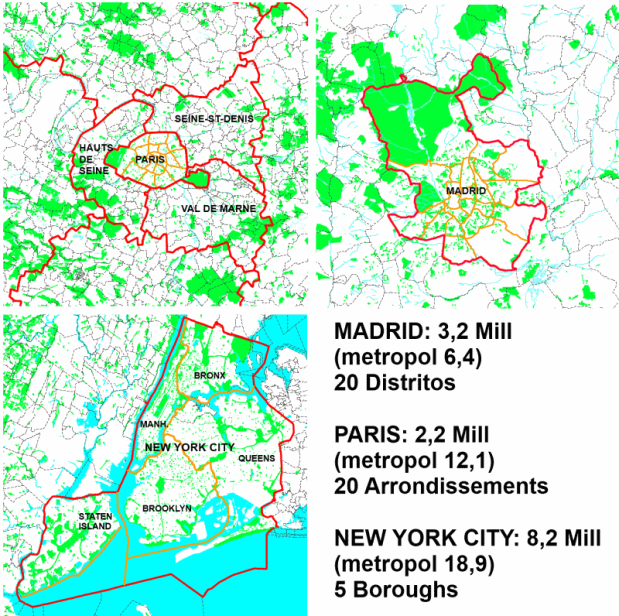 Large metropolitan areas are a specific governance study case. They are often spaces in which the presence of a large central city implies a first division among its citizens and those of the rest of the area. Besides, that central city often has a demographic and economic size clearly larger than that of any of the surrounding municipalities, a basis for inter administrative relations based on a very asymmetric power balance. 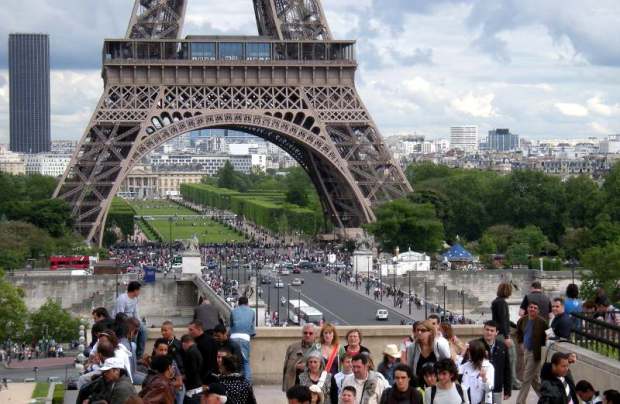 Paris is the most complex example in terms of governance. France keeps a fine-grained local administration, with more than 36.000 municipalities (Spain has less than 9.000, despite having about the same surface), grouped in 101 departements (Spain is divided in 50 provinces).
Région Ile de France encompasses the metropolitan area and rural areas. It has a regional planning document (SDRIF) and a common practice of intermunicipal agreements to develop large urban planning projects.
The 105 sq km of Paris constitute a single municipality divided in 20 arrondissements.
Parisians vote 163 Paris Councilors, who later designate the Paris Mayor; citizens also vote for arrondissement’s councilors, who designate the 20 Arrondissement’s Mayors. The central city administration has most of the powers, urban planning included, while the arrondissement’s administration has a more local power, in issues such as ward’s public facilities, and are consulted by the central administration in matters concerning their constituency. In all, Parisians vote 517 elected officials, counting both levels and the 21 Mayors.
Paris is small in surface, and the last time a neighboring municipality was annexed was in 1860. The dense urban area extends beyond its limits, to encompass, nearly all the three adjoining departments, that add up 4,3 million people (nearly twice the size of Paris itself). The four departments combined means slightly more than half the metropolitan population of 12,1 millions.
Each department is divided in municipalities. The 21 Paris Mayors are joined consequently by 123 additional mayors that enjoy the prerogatives of their job, with some limits derived from regional planning. Besides, each department has its own administration, with its own powers and budget.
The complexity of this system and the initiative of President Sarkozy to revitalize greater Paris (with the precedent of initiative Banlieues 89 during Miterrand’s presidency) are partly the cause for the creation of the Metropolitan Conference, a voluntary group of municipalities from the metropolitan area (Paris included). The Conference has as one of its middle term aims to lead to a governance reorganization that would keep the present territorial division, assumed as a guarantee of democratic decision making. 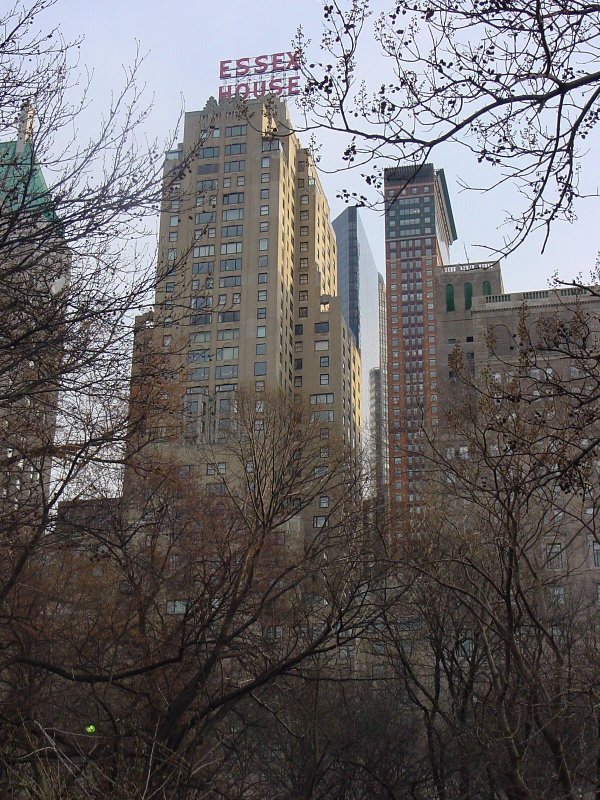 New York City is in the homonymous state, neighboring the New Jersey state. The current municipality (1.214 sq km) was created in 1898 by the union of Manhattan, the first dutch settlement, and four other cities; back then Brooklyn was already one of the most populous cities in the US. The five Boroughs keep a clear personality today; no more independent cities, they keep a county status, which implies separate courts of justice.
The fact that New York is part of a metropolitan area spanning three states, with different legal provisions regarding planning and a lack of federal laws on the subject, explains at least partially the lack of an enforceable Regional Plan. Nevertheless, New York was the subject of one of the first regional planning experiences in the world; the 1929 Plan, developed by a private association (RPA) and endorsed by the big economic agents after the great depression, laid out the main current transportation and public space elements. Ulterior revisions of the plan had a less powerful influence, but are still a valuable reference to understand the metropolitan area.
The Pot Authority of New York and New Jersey is the most relevant public body in metropolitan terms, as it manages public transit networks as well as harbor services on both sides of the state line.
New Yorkers elect a Mayor of New York, with global powers over the whole city. They also elect five Borough Presidents, who review all public and private land use projects and can recommend approval or rejection of those projects; they also appoint most members of the Community Boards (59 in the whole city), non remunerated citizens without administrative powers but able to convey petitions and requests. Elected officials also include the City Council’s 51 members (one for each council district), the City Comptroller, the Public Advocate and five District Attorneys (one for each Borough).

The city of Madrid has a much simpler governance system. The last annexation of a neighboring municipality was in 1960, creating a municipality larger than 600 sq km with half the metropolitan population.
The Madrid Autonomous Region includes the city and 178 additional municipalities. The functional metropolitan area doesn’t coincide with the region’s limit, extending to neighbouring regions; some areas in the Madrid Region are clearly rural. Metropolitan plans existed during the Franco era, but despite the attempts during the 1990s and the provisions in the Madrid Land Laws, there is no regional plan. There are no metropolitan governance organisms, but specific agreements on technical services exist. The Consorcio de Transportes de Madrid, integrating the public and private transit companies, is the most relevant element in metropolitan mobility.
Madrid citizens vote in a single municipality-wide constituency, with closed political parties lists, to choose 57 city councilors proportionally to the votes obtained by each party; councilors designate a Mayor (currently a woman). The day to day administration is assumed by a governing board of eight members appointed by the Mayor.
The municipality is divided in 21 districts. The Mayor designates a President Councilor for each district, with no obligation to take into account the electoral results in that district; the elections winner takes all the municipal power. On a daily basis, the role of the opposition councilors is limited to a government control function.

The Parisian system is subject to criticism for its extreme administrative complexity and how difficult it is to get a consensus on large scale operations; but it is also praised for the wide chances it gives to local opinions to be taken into account, although it doesn’t prevent situations as the 2005 riots.
New York’s system is conditioned by the problems to articulate solutions encompassing the whole tri-state area and the wide gap in living quality among different parts of the city; nevertheless It allows for an agile action.
The Madrid system is often criticized by its monolithic aspect and its lack of representation opportunities for small areas, lacking the checks and balances inherent to a more desegregate system; having a similar area, the four central departments of metropolitan Paris boast 144 mayors, as opposed to a single one in Madrid. Despite that, decision taking is often agile. 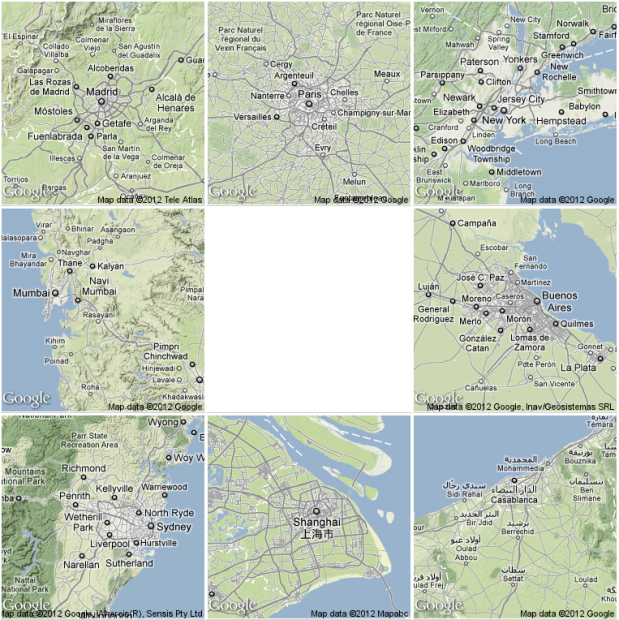 Large metropolitan areas are the most complex stage of the urban phenomenon. When these cities are also the political and/or economic capitals of their countries, their functions become even more complex. 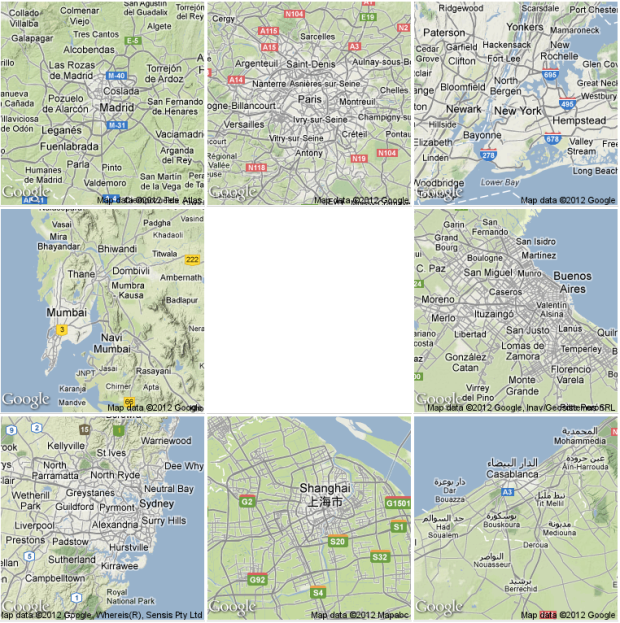 The overlay of highway infrastructures is the most present layer of the future configuration of public spaces and the visibility of the urban landscape, regardless of its qualities. Public transportation using often tunnels, the urban freeways create the true face of the metropolis. 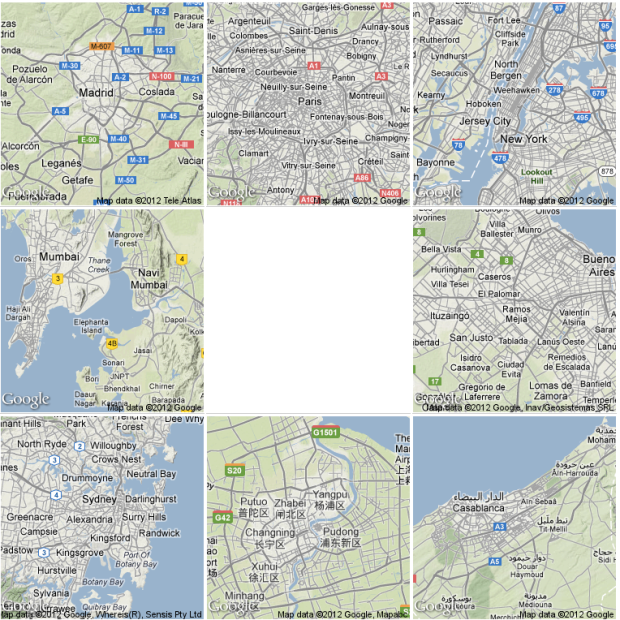 The urban insertion of these road systems can be done with different degrees of success. Cutting traffic on the riverside embankments of Paris seems a simple solution; reclaiming the Manzanares embankment in Madrid by burying the M30 traffic means a huge cost, but brings back a quality public space that has become a clear public success. The Mumbai sea link proposed roads seem similar in concept to what was the M30 beltway in Madrid five decades ago: relocating an infrastructure problem in a public domain, solving the mobility flux with a strong impact on the environment and the landscape. 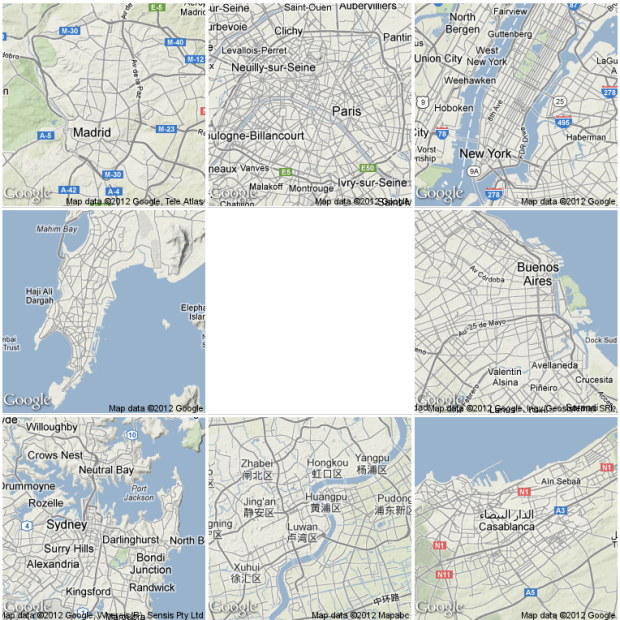 The urban quality of these spaces comes also from their ability to integrate open spaces and landscape features : rivers, large parks, sea shores, beaches… the presence of several uses on the elements that by themselves are transit ways is one of the main issues. 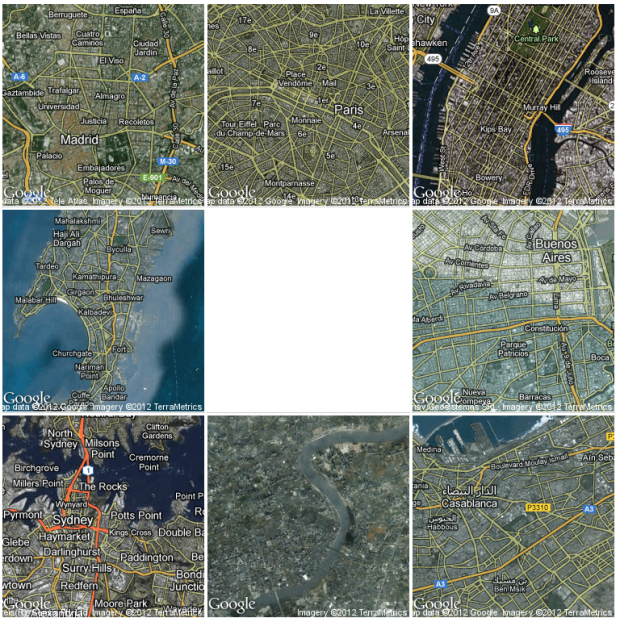 The hierarchic structure of the city is also relevant in metropolitan areas. The territory is never isotropic, and even if the urban theory is always devising polycentric structures that can often work, the most usual is to see a strong central core. The experience of many American cities, where this core has been depleted over time by the translation of functions to the suburbs, shows that urban quality can suffer when the center cannot hold. The historical cores that where almost the whole city a century ago are today just a small part of the population and a shrinking proportion of economic activity, but they still have a strong symbolic role. 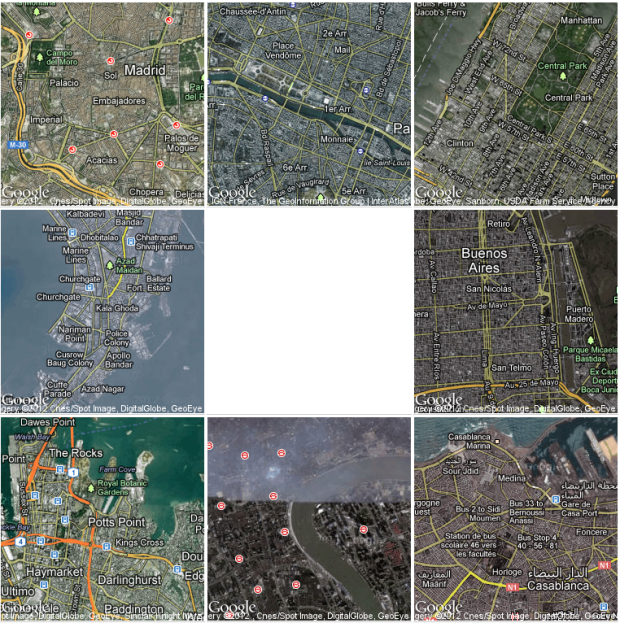 The dynamics of the urban core, even if it keeps a relevant strength, can have a negative impact on population. The role of the core as a symbol can increase the presence of large public facilities or corporate headquarters, usually reducing the local scale public facilities and services for the area inhabitants, that can feel they have better chances in the suburbs. 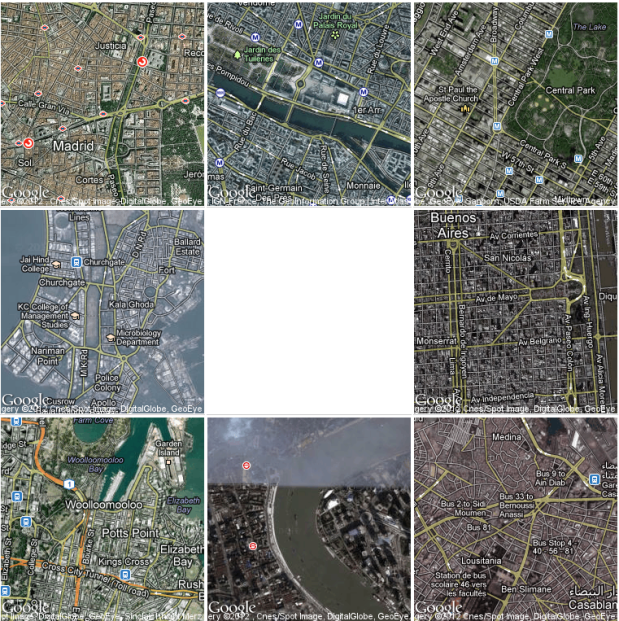 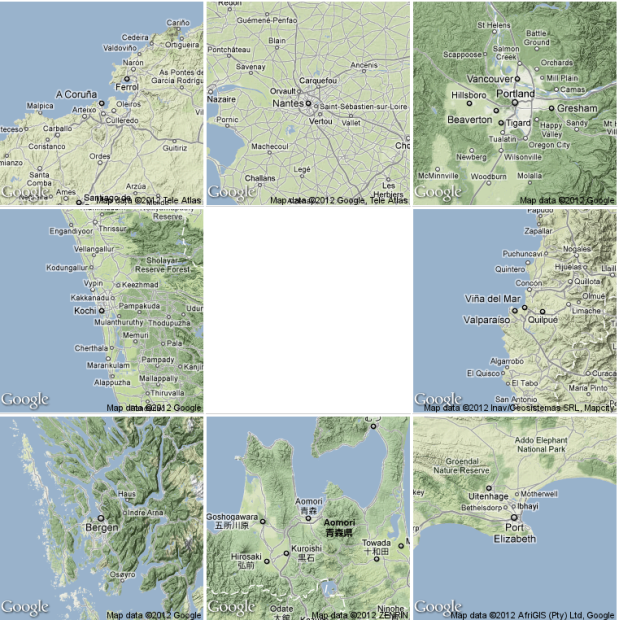 I live in a city, I work on many, and I am interested in the city as a thought subject, in itself or in its links with the land in which it sits. I live in Spain, a country under a heavy crisis somehow linked to having lost the perspective about the nature and the role of cities; for a decade the city has been seen not as a tool for a better life, but as the chessboard for an economic game, confusing means and objectives.
Among the results of this crisis there is a growing awareness of urban issues. Some look for those guilty of the crisis, something I’m interested on as a citizen, but that is not the purpose of these lines. Some want a paradigm shift through a stronger citizen involvement, educating people as to obtain their engagement. Otherwise, it would be naïve to think that the city will no longer concentrate huge economic interests, often legitimate, whose effective social articulation also requires a reflection in a moment in which a growing (and often preposterous) complexity of the planning system makes it loose its legitimacy as a tool to improve our vital environment.
All the approaches enrich the debate. This blog shows a perspective on cities and land, taking into account long term dynamics: relations with the wide land context, urban pattern inertia, and the chances to improve the efficiency of the city as an everyday tool to improve our lives. 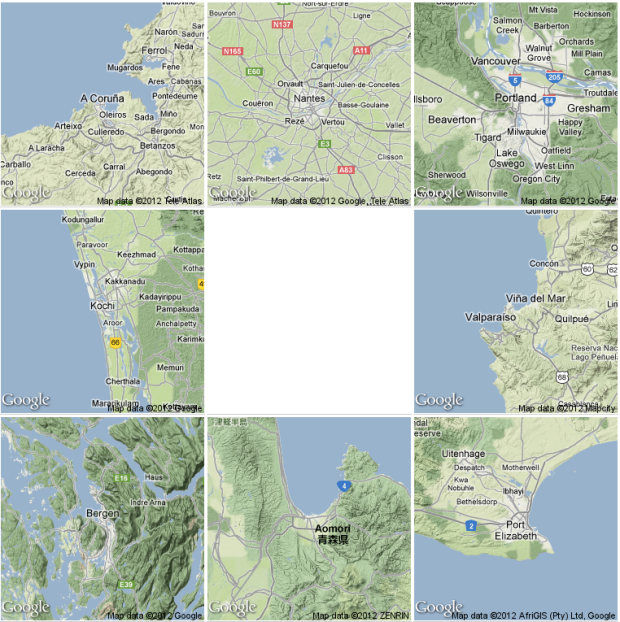 The blog will be composed of comparative case studies regarding different social and geographic contexts. The comparative analysis is sometimes based on my own personal travel experience, and in the rest of the cases on available geographic data. There is a risk to be unable to grasp the meanings in some contexts; but there is also a chance to find interesting elements in unexpected places. 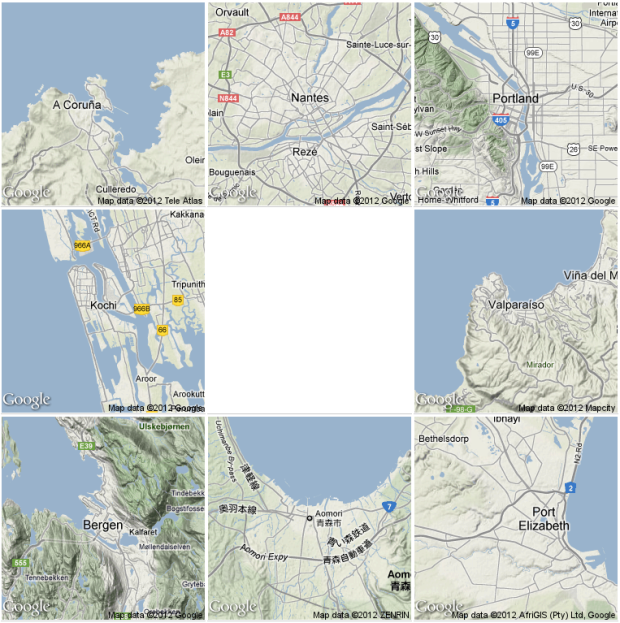 As an example, this first post includes a series of images of eight midsize metropolitan areas: my hometown (La Coruña), two more European cities, two Americans, an African and two Asians. I only have been to three of these cities, and the depth of information available is not homogeneous. 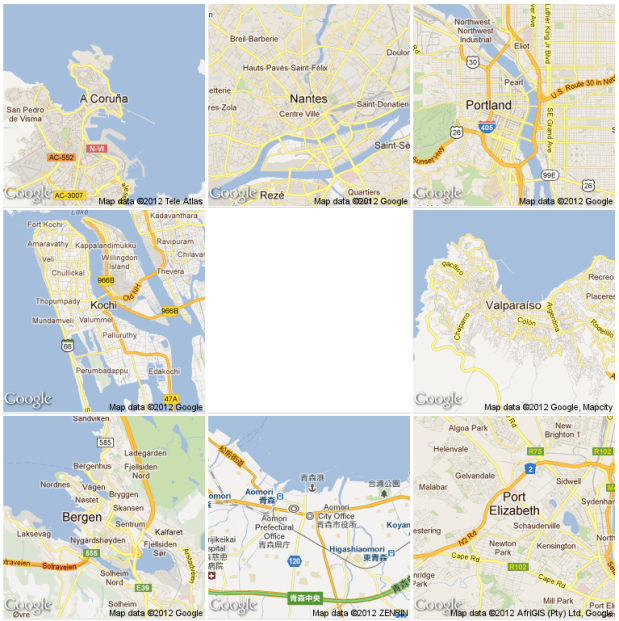 A progressive scale approach allows a better understanding of some problems. The use of universally available cartographic resources does not hinder the explanation, but in some cases more elaborate maps will be used. 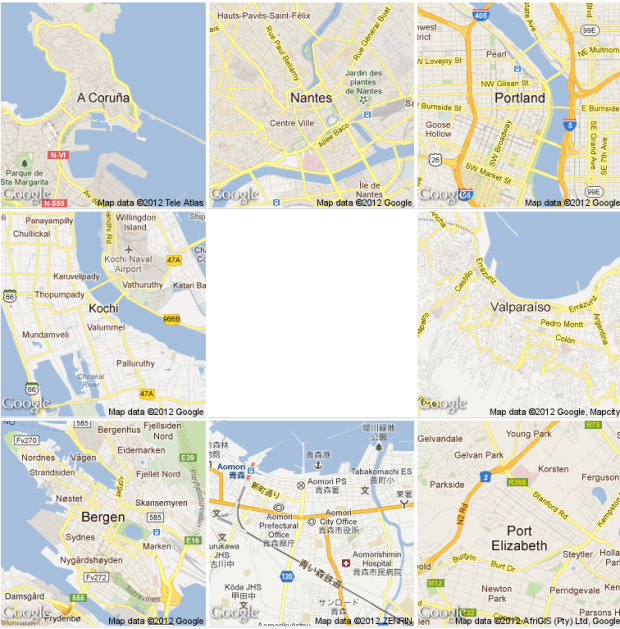 I am an urban planner because I am an architect, even if there is no compulsory causality. In every case I will play with scales as I find fit, from 5 cm to 1.000 km. Each question requires a scale or a combination of several, and social, economic and environmental issues coexist with an aesthetic and constructive dimension of the city. 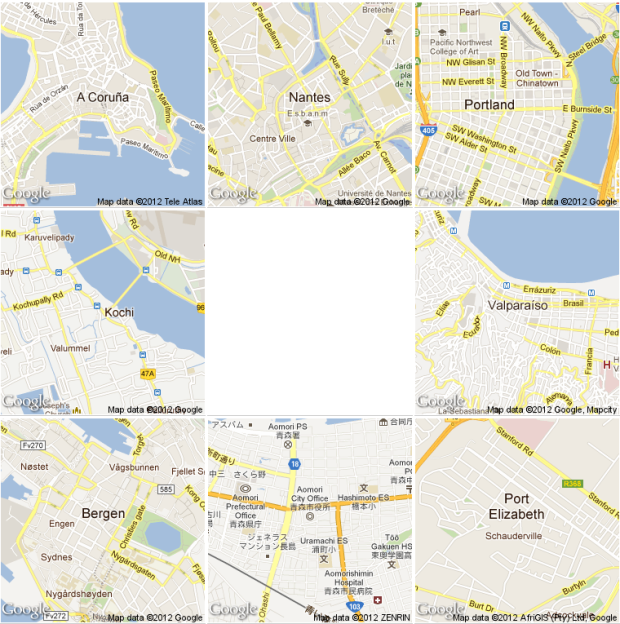 This blog is not a collective work; I am to blame for form or content errors. I will be grateful to my readers for their observations leading to error correction.