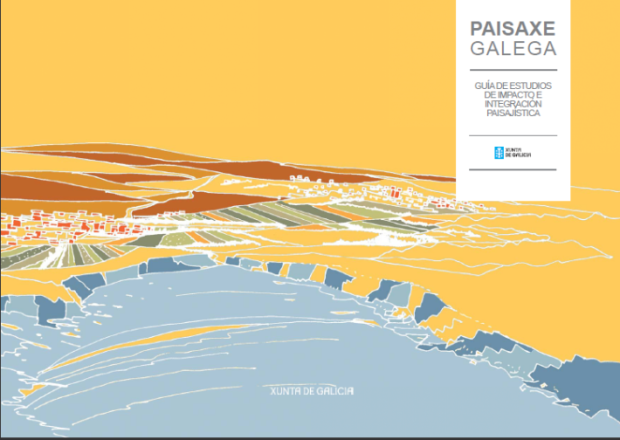 Here starts a long run series. A substantial part of the bibliography that can be needed to approach urban and regional planning today can be accessed for free on the internet. A new page in this blog will house the references.

The European Landscape Convention (passed in Florence in October 2000) is the only international treaty on the subject. Its incorporation to the Spanish laws in 2008 has given relevance to the subject, integrating it into the juridical realm. There are relevant initiatives that aim at guaranteeing the quality of the landscape in many regions.

The Guide to Landscape Impact and Integration Asessments edited by the Regional Government of Galicia defines methodological criteria in the subject, taking into account the compulsory need for such instruments in some cases. 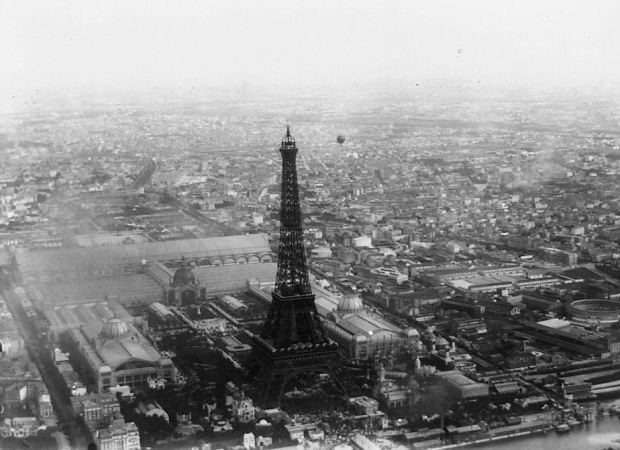 The Eiffel Tower in its original context: the 1889 World Fair

The Champ de Mars was originally part of the agricultural plains west of Paris, and its transformation began when the Military School was built in 1865 ; its role was to serve as a training ground between the School and the Seine river. Under the Revolution the Champ de Mars is the scene of many festivities and executions, a symbolic role reinforced under Napoleon’s regime. In 1867, 1878, 1889, 1900 and 1937 this space hosts world fairs.

The Eiffel tower is built for the 1889 world fair, marking the centennial of the Revolution as an opportunity to show the technological progress of France with a 300 m high tower. This exhibition role is later amplified by radio and television broadcasting stations and radars, taking advantage of its dominant position over the Parisian plain.

The Palais de Chaillot , with its two curved wings on top of the hill that overlooks the Champ de Mars from the northern shore, was built for the 1937 world fair. The esplanade between the two wings allows for good view of the Eiffel tower and the Champ de Mars.

A series of successive initiatives without a master plan has given as a result one of the most symbolic spaces in the world. The quality of each project, the chance that at the end of the concession term of the tower there was not an expedient decision to demolish it, the persistence of the world fairs site as a public space are just by change and do not result from a single project, but the result shows a powerful formal quality. 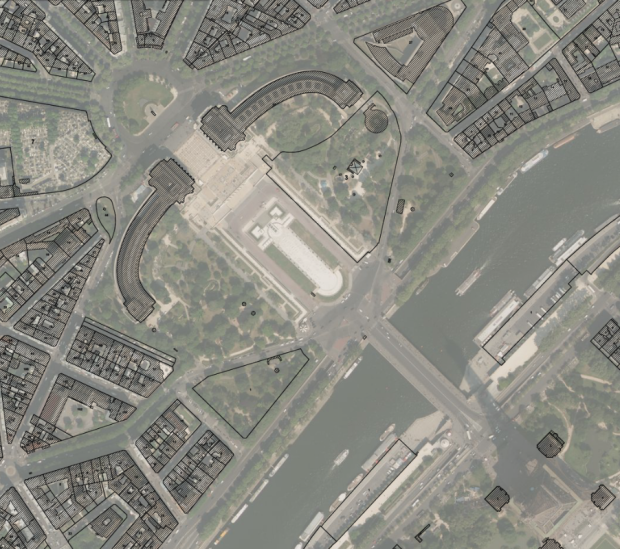 The Palais de Chaillot and the Tour Eiffel

What seems to be a comprehensive documentary on urban issues

I’m currently about 30 minutes (out of approx. 86 minutes) through Urbanized which I am watching here, I see it is the third documentary in a series by Gary Hustwit who also did Helvetica (a documentary on what is aptly called there something along the lines of the ‘font of gentrification’ – watch it when you get a chance).

The images and composition are incredible, and I can imagine using this as a first assignment in an Introduction to Urban Studies course or equivalent…

Many basics and themes that could be expanded upon in subsequent discussions – Haussmann, Garden Cities, public transportation and democracy Robert Moses vs. Jane Jacobs – specific locations featured so far include Santiago Chile, Mumbai, Bogota, Brasilia, Copenhagen, un-cumbersome interviews with a variety of architects, nyc city planner, etc. so far seeming to be very inclusive geographically. 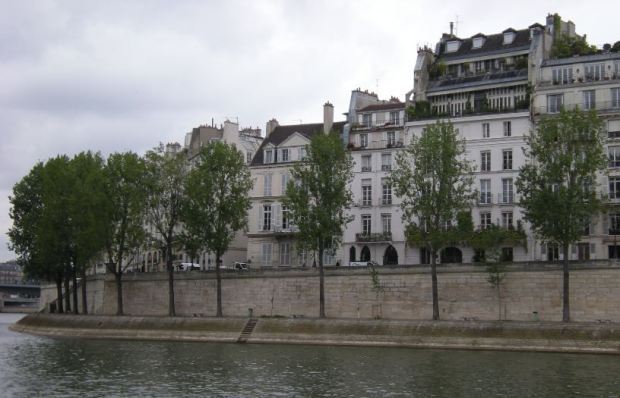 The Seine embankment on the Saint Louis Island

The historical core of Paris is the most complex zone of the metropolitan area. Despite its continuity as the urban core since roman times, the substantial transformation during the XIXth century under Baron Haussmann and the subsequent works during the XXth century make it in many places a somehow recent urban tissue.

Under the reign of Napoleon III and for a not that long period (1853-1870), Haussmann directed a radical urban transformation. As well as Cerdá in Barcelona or the English reformers, he associated the old urban tissues from the middle ages to epidemics and social problems, and thought that transforming these areas was an urgent need. 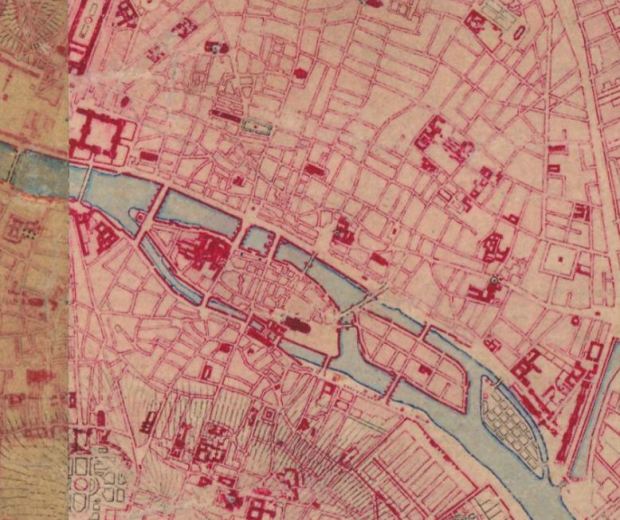 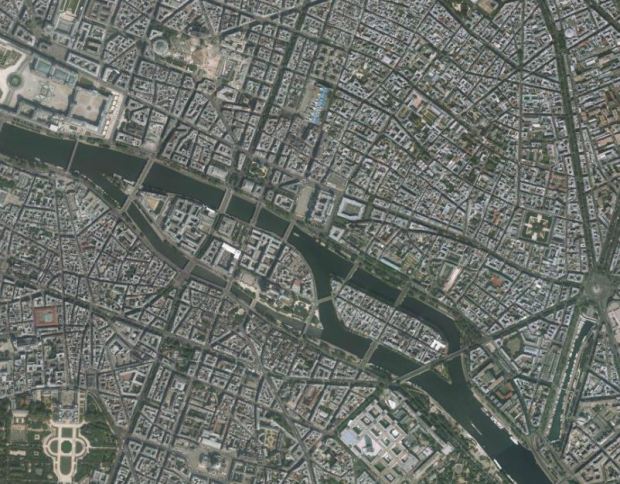 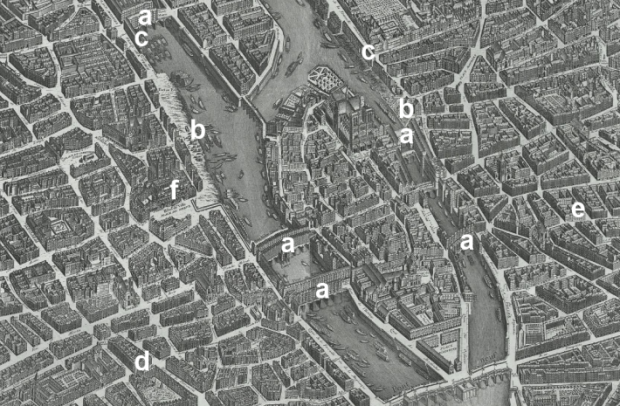 His approach to the problem is similar to what can be seen today in many cities: a combination of a search for administrative efficiency that sometimes forgets any other goal, and a new paradigm. If today the paradigm is the idea of sustainable development, Haussman is the first example of what late will gain traction to reach its zenith around the first world war under the name of hygienism.

Fueled by new management techniques (which make him suspect of financial scandals), Haussman is not limited to the urban extension problem as Cerdá in Barcelona (whose ideas about refurbishment of the existing city never fully gain traction), as he also defines, with a central role in his urban model, a transformation of the central core by opening many boulevards that ensure a consequent streets grid. The sanitation and sewage system is an innovation in its days, due to its design and ambition, and the Seine shores receive embankments. 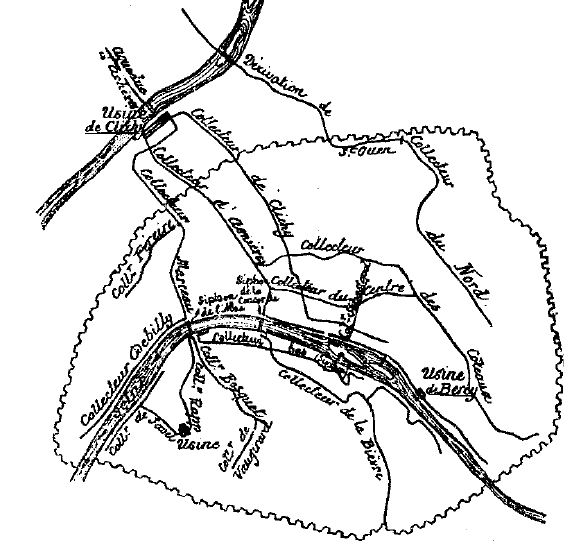 The romantic image of the XIXth century Paris that is transmitted by tourist guides is an abrupt change for the people that live these transformations. Elements that today have been integrated to the urban landscape and can be seen as unmistakably Parisian by tourists are in the beginning just mass- produced urban furniture fixtures that are placed in an uniform way on the public space.

Paris today is still marked by the Sebastopol and Saint Michel Boulevards, what was the large market of Les Halles (substituted by a large retailing mall in the 1970s and a large transit exchange, and nowadays again subject to substantial construction works for a new radical transformation) and the new embankments, plus the building of a large number of monumental scale buildings that are designed to highlight the axis of the new boulevards.

The difference between this experience and that of other cities is the high technical and aesthetical quality of the designs of these elements, as well as the inner coherence of the urban project, that would not be completed until after the fall of the second empire. The lack of a geometric basic system allowing for an extension ad infinitum of that new urban tissue, as Cerda’s grid, is not an obstacle to the continuity of the tissue, as that role is played by the Thiers Wall. While Barcelona and Madrid tear down their walls in 1860, in 1844 Paris opens a new external wall, in that moment far away from the urban area, but anyway a rigidity condition. These walls are demolished between 1919 and 1929, and later their vacant site becomes the location of the peripherique beltway, but to this day the 1844 wall marks a discontinuity in the urban fabric and is the administrative limit of Paris. 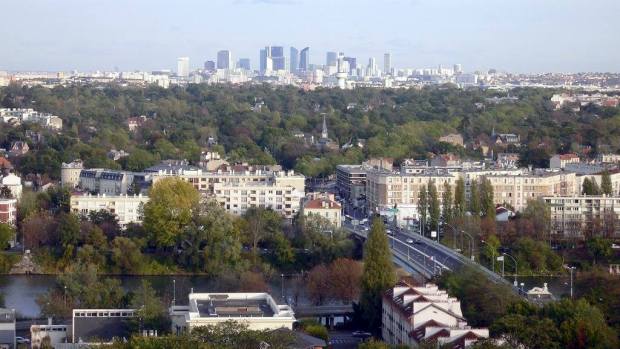 The parisian geography is that of a plains region, marked by the Seine and Marne valleys and local heights that, without representing mountain ranges, are a good set of belvederes over the area. 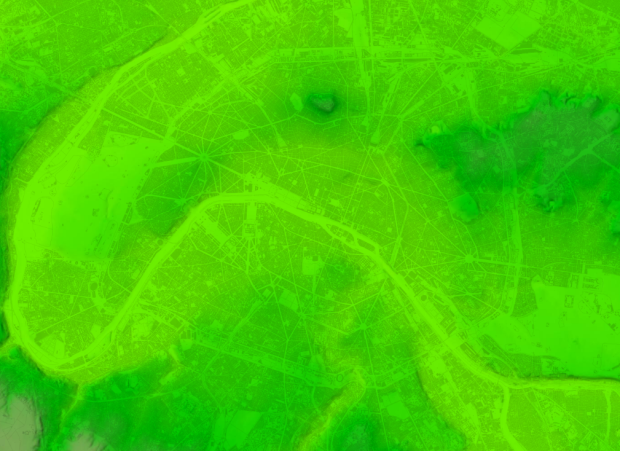 Shaded digital terrain model in and around central Paris. Similar maps can be obtained at http://www.geoportail.f

Some reference points and a graphic scale to grasp the dimensions:

Next post will show a personal vision on each of these spaces. 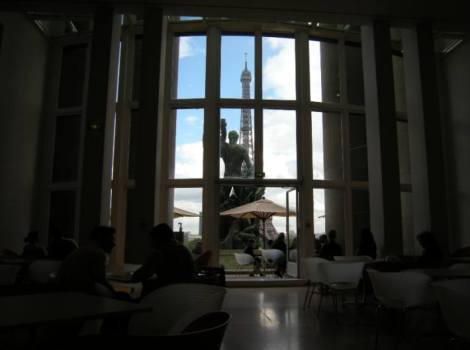 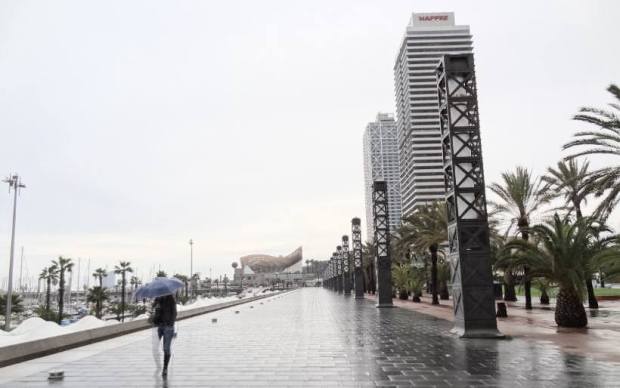 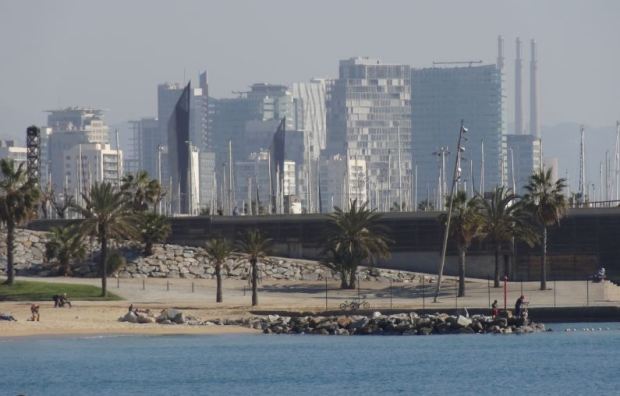 Diagonal Mar is the area in which the Diagonal arrives to the seashore by the Besos mouth. The Forum 2004 has left a space with a large retail, office and high end residence real estate basis. 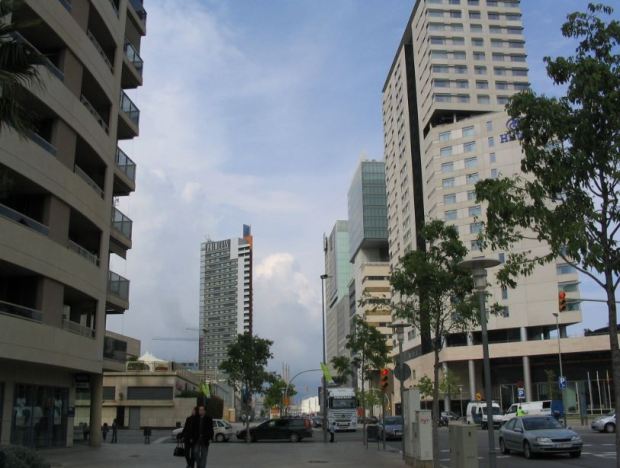 I have just seen it published: our article about climate change adaptation as seen from the local urban planning context in the Basque Country; in Resilient Cities 2- Cities and Adaptation to Climate Change- Proceedings of the Global Forum 2011 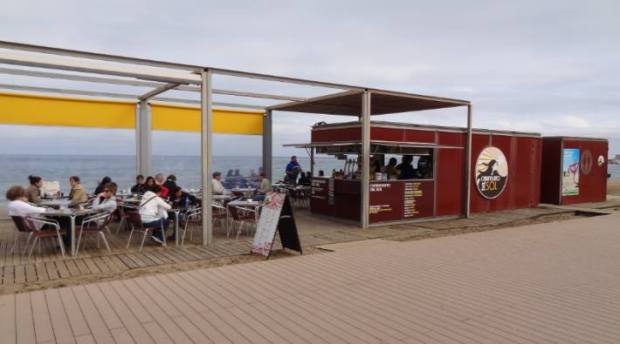 The Spanish beaches often have chiringuitos, a generic name for food and beverages establishments on the sand. Their shape is varied: in Barcelona these are unified design concessions. 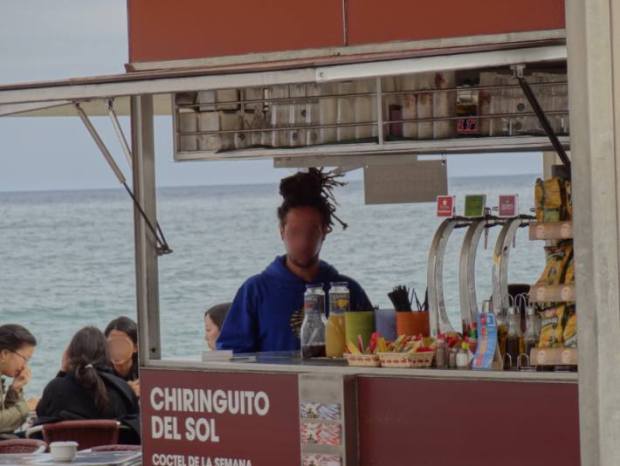