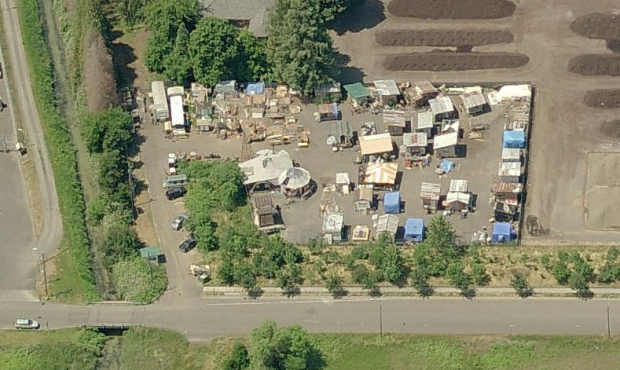 Dignity Village is a city-recognized encampment for homeless people in Portland, Oregon. It is a space which shows some similitude with the transit zones for nomads in some European countries as France (even if those zones usually are designed for trailers), or to a more organized and controlled form of the small shantytowns (núcleos chabolistas) in some spanish cities, that really constitute illegal settlements.

There are similar experiences in some other American cities, as this report by the National Coalition for the Homeless shows. They can begin as a more or less spontaneous tent city, which authorities can eventually relocate to a controlled site, with an organization not unlike a camping site. It is a bit like a shantytown as there are no streets, but just precarious buildings.

The most relevant shantytowns by number in the recent history of the US, Hoovervilles (named for the President at the onset of the Great Depression), seem to have left no trace; but in times one was, for instance, occupying a part of Central Park.