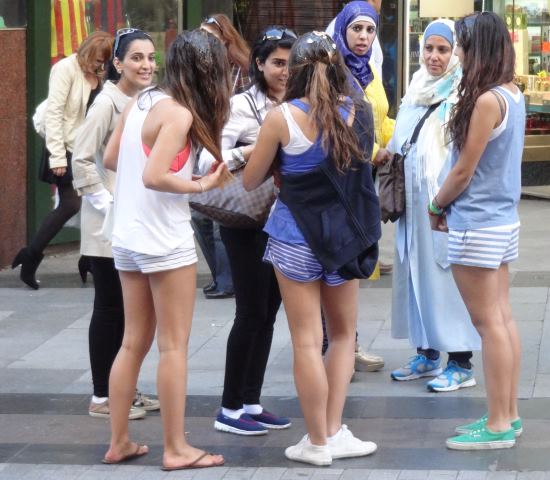 This is a good example of what has been often said of the difference between a public space and a private one, especially that of a retail mall. The snap was taken last sunday in Calle Preciados, the main retail street in the core of Madrid. Just get a look at the hair of the girls that show their backs; they were among a larger group of teenagers that was raising funds for something like a term-end travel, and they found no better way than to propose to pedestrians to crash an egg on their heads, just for one euro; this is the first time I see this. I have seen many ways to use your head to earn money, but this one had still not come to my mind. Here they are seen trying to convince some women to enter the game, to the suprise of other pedestrians.

The point here is not your right to go and have an egg crashed on your head on the street, or wether that is good or not for the image of the retailers (that in such central locations have already seen many baffling things). It is not even an issue of freedom of speech (altough there could potentially be somewhere a connection). But this is hardly something you can think of in a hypercontrolled environment, and despite the fact that I am not going to spend an euro on that (or to crash the egg on my own head…), this is just a face of the unexpected that also happens in cities and enrichs the experience in them. It is the kind of thing that can be just a surprising feature, a tradition waiting to be established by fund-raising teenagers prone to be included as a local flavor in some hip tourist guide, or become a nuissance if it becomes a widespread habit.