Ports matter as exchange points between exterior ports and the served inland areas. How is this organised in terms of metro area relations in terms of spatial planning?

Brest has a regional planning document (SCOT) encompassing the western tip of Brittany and 14 intermunicipal cooperation schemes. The SCOT is relevant for some land use operations over 5 hectares (some 12 acres) and big box retail proposals. Its maps must be adapted by local planning to a larger detail scale. The urban system is organized in urban agglomerations (large population settlements in all the coastal municipalities+ 3 secondary settlements + areas so defined in local plans), villages (over 40 dwellings) and hamlets. Infill growth is priorized (and the only option in hamlets), and higher level settlements can also have continuity growth (no leapfrog growth permitted).

Brest’s regional development scheme basic layout: a special relevance is given to the conservation of the coastal band and to the survival of the traditional farmland. Urban growth must follow a set of rules, being directed towards a linear expansion of the main city along the northern shore of the bay 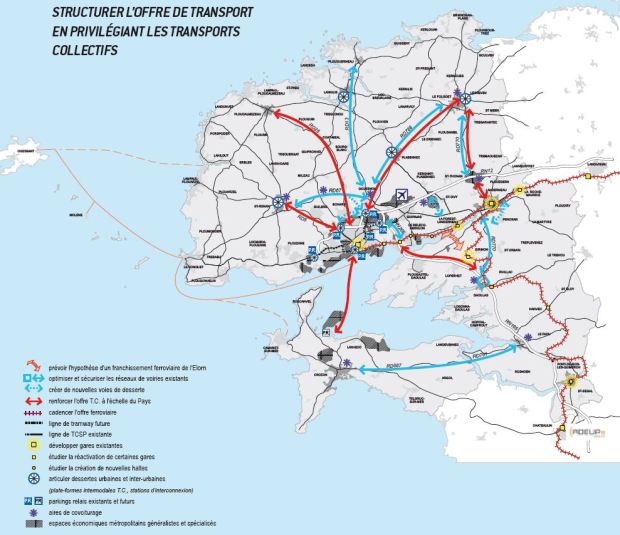 Transportation is also a relevant issue for Brest’s SCOT.