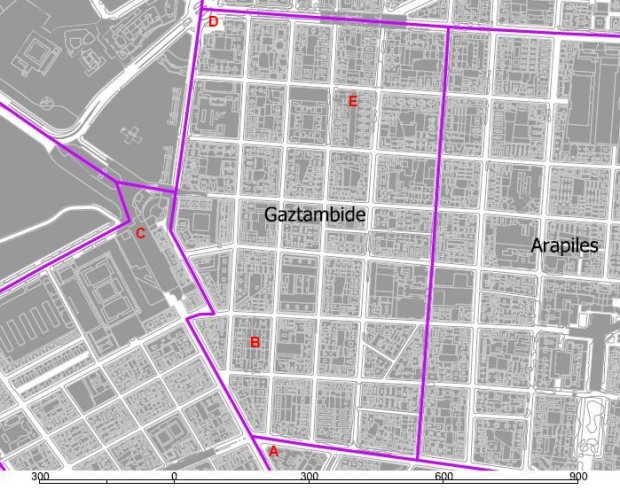 Gaztambide was in 2001 the barrio with the highest residential density (dwellings per hectare) in the Madrid Municipality; in 2012 it was the third densest in terms of residents per hectare, after Embajadores and Pacífico. But it is not an area filled with towers; it is simply a zone in which there is almost nothing but dwellings (and a sizeable retail presence, mainly on the ground floors); it is a socially fashionable area of the city. The dwellings have sometimes the limitations of the XIXth century Ensanche, that has been densified to the extreme, so sometimes the corridor in your house has a larger area than most rooms, and some rooms have scarce light and air; but it is a posh area, as far as central Madrid goes (almost on par with the Barrio de Salamanca).

The southern limit is the Alberto Aguilera Street, having as a beacon (as much socially as in terms of bulk) a branch of El Corte Ingles department stores (A), which helps dinamize the Princesa Street (A-C), also served by the large Intercambiador de Moncloa, (C) a subway/bus exchange platform giving acces to the northwest sprawling suburbs. The western flank (C-D) is the interface of the XIXth century grid (here mostly built during the XXth century) with the Ciudad Universitaria and its green spaces. To the east and north the limits are with a similar grid tissue. The high density you find is subjet to variations: you can find an experiment on housing innovation from the first third of the XXth century, the Casa de las Flores, by Secundino Zuazo (B, on the left on the aerial image), with an interesting recent building on the block inmediately to the north that opens diagonally the block courtyard to the street, and you can also find what simply are extreme excursions into density (E). 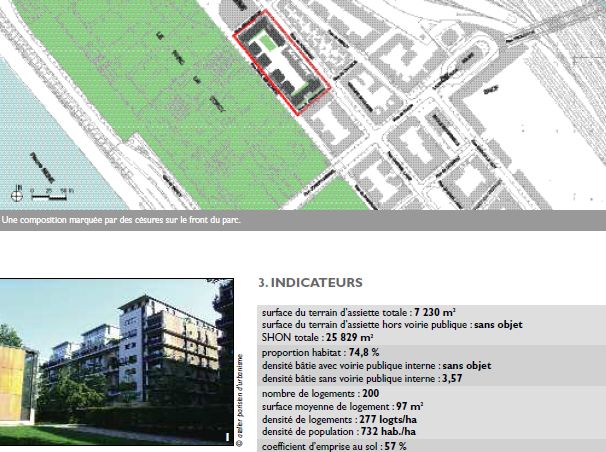 What do 290 dwellings per hectare mean, when compared to other urban tissues? in Paris it could be compared to the ilot Pommard- Renoir in Bercy, always taking into acount that the references in Habitat- formes urbaines (page 178) are to the city block, so they are somewhat higher than in a neighborhood, albeit not that much in one with such lack of public spaces as Gaztambide. On the other side of the Atlantic, according to the 2010 census the island of Manhattan has slightly over 842.000 housing units on an area of 8.746 hectares, so the average is close to 100 dwelling units per hectare… It might seem surprising, but just take a look at the size of Central Park when related to the total island, and how the areas out of downtown and midtown have lower heights, and, above all, the fact that many skyscrapers are offices, not homes…

A view of Manhattan from the west, with Central Park, by blueridgekitties. You can access the full image on http://www.flickr.com/photos/blueridgekitties/4934291515/

The most common appartment size range in Gaztambide in 2001 was 91-105 sq m, with an average of some 80 sq m , so below the Bercy block, and higher than the average in Manhattan.

All this will surely lead my fellow architects to rise their hands and ask: well, but what about built density, as floor/area ratio, including the complexity of other uses beyond housing? That will be the subject of future posts…