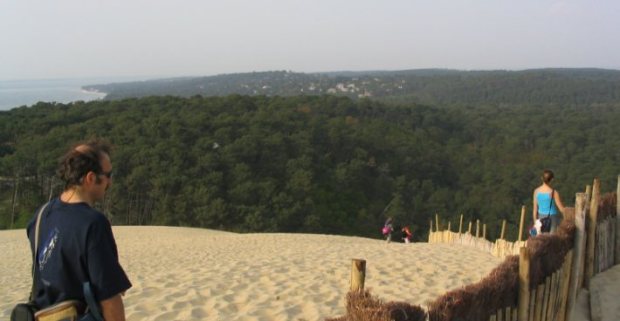 The woods of the Landes from the Pyla dune. Ocean to the left

The Landes de Gascogne are a part of France constituting the most of the littoral of the Aquitaine region, with an area close to 14.000 sq km. They constitute an example of the complexity of the large territorial interventions.

What today is one of the largest forests in Europe is really a human creation. The Landes where traditionally perceived as an unhealthy swamp, with poor soils and a subsistence agriculture and sheep cattle, that transformed a scarce vegetation in manure. After many unsuccessful attempts to develop agriculture with many alternatives from rice to tobacco, and under the threat of malaria and mobile dunes, the Law of June 19, 1857, mandates the draining of the swamps to plant pines, to be used for their resin and wood.

Draining and plantation last until 1914. In parallel there is a relevant privatization of land (until then largely public, facilitating the transit of cattle) and social tensions rise due to the transit form subsistence agriculture and cattle to wood harvesting.

The relevance of resin decays, to disappear at the end of the XXth century. In 2009 the Klaus storm causes a large number of windtrows, leading to measures to stabilize the wood markets and to a debate on the future of silviculture model.