An elegant neighborhood is a space in which architecture has been developed with a greater quality over time as, simply put, its neighbors have had the money to pay for better buildings and they have maintained them. It seems Gangnam-gu is one of the richest neighborhoods in Seoul, but as the city was almost razed during the Korean war, this probably will only translate into an elegant area in the classical sense with more time (at least they have a song…).

The Retiro area in Buenos Aires (some blocks north of Plaza de Mayo) and the Barrio de Salamanca in Madrid (north of the Retiro park) have been built mainly during the XIXth century.

In Madrid the Salamanca area, projected as an integral extension of the city, is, as the Barcelona ensanche (a contemporary project) a tentative to use the grid as a directive principle. It has finally become the most exclusive neighborhood as those that had less money found less expensive opportunities out of the regulated city. And it still is a highly valued area, albeit an extremely dense one; as in Barcelona the original building bylaws where changed allowing a more speculative development. Anyway, there are still two blocks east of plaza de Colón where you can still see the originally projected block model, with large central courtyards, usually “forgotten”.

In Buenos Aires the Retiro district had no special intention to become different by layout or project. How would you differentiate you as a grid in a city that is a whole grid? In fact, it is a less regular grid than that of Madrid (one also adapted to preexisting elements). The neighborhood appears when the then rich citizens look for a new space after the 1871 yellow fever epidemics; Paris is the model for the architecture in a moment in which Argentina, as an agrarian power, becomes an emergent power. From the 1930s it is an entry point for modern architecture. 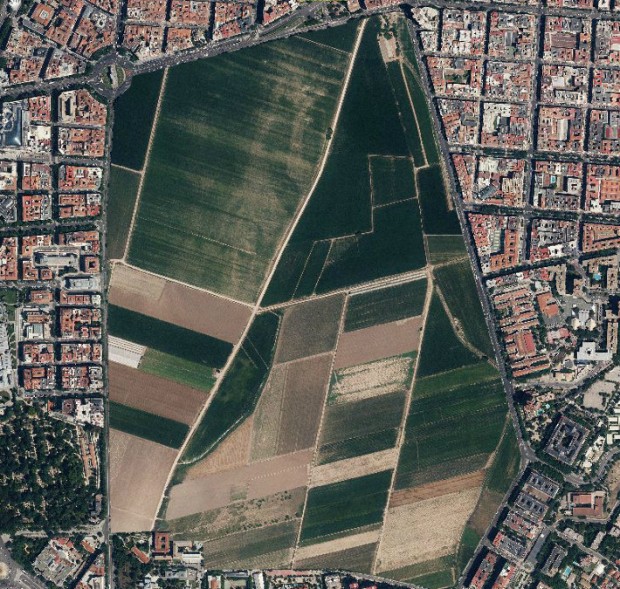 The Retiro park, in central Madrid, as substituted by farmland in the region, at the same scale

After seeing what happens in several cities, a look at Madrid. Data from the Regional Statistical Institute shows that for five crops relevant to the average urban diet (wheat, corn, potatoes and olives), cultivation surfaces have diminished considerably, but for olive trees. Output has also shrinked in several cases, but following more erratic patterns (agriculture being an economic activity, farmers plant according to their benefit expectations). Productions by hectare usually have risen.

Overall, over an hectare (2,5 acres), the average for the last 25 years shows that you can grow:

The Retiro Park in central Madrid  is slightly over 100 hectares, a figure that I will use to simplify. If the Retiro was to be entirely used for cultivation (this is just a mind game, by no means a proposition…), each of the 1.075.000 inhabitants of central Madrid (area covered by the Proyecto Madrid Centro) could eat, for each harvest:

Even if some experiences have shown that urban agriculture can be more productive than current agriculture methods, it is also true that the qualities of the Retiro soils for agriculture should be assessed…

Rephrasing the argument, for each sq meter (some 10 sq ft) of urban farms, and according to these figures, in Madrid you would get:

This doesn’t mean that urban agriculture has no sense in Madrid, but that its real production capacity must well assessed, and that it is important to understand that its benefits are not only in food production, encompassing also social and environmental aspects.