Mumbai (the city formerly named Bombay) is presented as the economic capital of India, with a metropolitan population over 19 millions. It is a city I don’t know in person, so these notes are based on secondary sources.

Historic Mumbai results from the union of several islands, creating a complex seashore. After a northward growth for the previous century the state of Maharastra begins the development of Navi Mumbai. A new town is so configured on 344 sq km on the continent, east of Thane Creek, as a part of an eastward movement reinforced by the opening of Vashi bridge and the new Jawaharlal Nerhu Port Trust. The aims of these projects are to absorb rural immigration that otherwise would congest insular Mumbai, to control growth and to balance business locations in a context of improved quality of live.

Growth previsions for Navi Mumbai have not been met, partly for a reason often critized in India: the shortcomings sincronizing urban growth with capital investment in infrastructure, as well for basic networks (water, sewage and sanitation, waste processing, energy) as for transportation. Maharastra State has a current investment program set to develop a transportation scheme including freeways, subways and monorail. 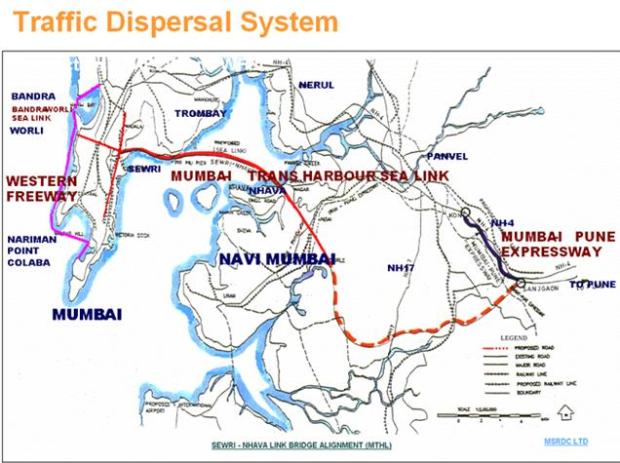 In this context Mumbai has plans, dating from the 1960s, to create a freeways network including a new 22 km bridge linking central Mumbai to Navi Mumbai and the port, as well as a coastal beltway on the western shore. This beltway is defined as a set of bridges aligned in parallel to the coastline, whose exit ramps are linked in perpendicular to the existing shore road.

The Bandra- Worli Sea Link (also known as Rajiv Gandhi Sea Link) is the first element in this western freeway. Composed of two parallel roads adding up eight traffic lanes, over a structure with concrete viaducts with a part cable stayed over Mahim bay, it configures a toll section of 5,6 km. It is today the southern extreme of the Western Express Highway, connecting Chhatrapati Shivaji airport to Worli, one of the main business districts in Mumbai. 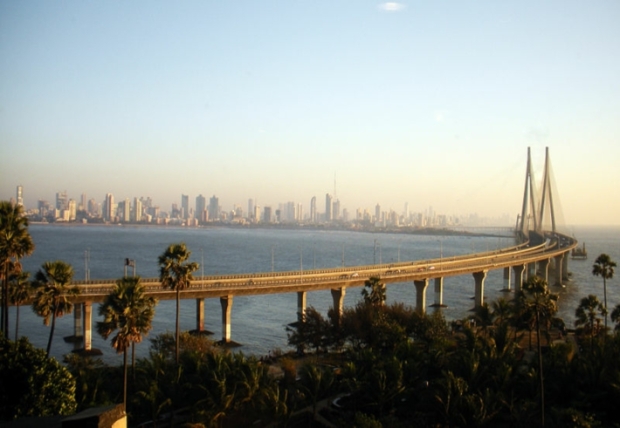 The Indian web scene concerning the project shows an intense debate on the issues raised by the Bandra- Worli project, as well as on the whole sea link freeways project. On one side some inscribe the project on an economic development vision and as a solution to the urban car congestion. On the other side critics address the environmental impact, the radical change in the landscape implied by a permanent structure on the skyline, and the high construction costs. Some voices propose an alternative for shouthbound parts of the project, defining an configuration as a freeway on the shore, with a much reduced cost, without a definitive solution on sight.

The Bandra- Worli link was open to the public on june 30, 2009, presented a reduction in travel time between the two access points from close to 60 minutes in peak hours to 6 minutes. The configuration of the southern exist seems especially prone to congestion.

The freeway network project includes linking the Worli exit to the Navi Mumbai bridge through a future elevated freeway to Sewri, a 4 km section over one of the busiest parts of Mumbai.