Madrid has a dense public transportation network. An essential element is the metro (rapid transit) network, opened in 1919 and counting today 12 lines, 296 km of track and 238 stations. The network is managed by the Regional Government, and is integrated in a Regional Transportation Consortium that has a unified fare system.  In 2010 metro sold 630 million tickets, the highest figure among the elements of the transportation system.

As in most rapid transit systems, it is focused on core- periphery relations; the network extensions have reinforced the nodal role of the historical city core through the links among confluent lines. Not having a fixed limit for the core center, and taking as a reference the limit of the scope of the Proyecto Madrid Centro, 48% of that area is at less than 300 m of a metro station. That figure is similaire to that in Paris; Manhattan seems to present a similar figure. Mumbai, a city that plans to introduce a rapid transit system in the next years, uses the rail network as the backbone of its public transportation system, with a less dense coverage. Buenos Aires combines a low density rapid transit network with the railroads. The following maps show the described networks of those cities at the same scale, as well as the 300 m radius from the stations.

The network finds its best efficiency through its exchanges with other public and private transportations modes. The city is served by several high speed and conventional rail lines, long distance buses and the Barajas airport; the metropolitan scale transportation rests on the suburban rail network, along conventional rail tracks, and some recent extensions of the metro network.

Line 12 (also known as Metrosur) (A) is noteworthy among these extensions. It is a circle line linking the southern metropolitan municipalities (historically those less favored in economical terms). It is linked to the rest of the network through the suburban trains and a single connection to a metro line. 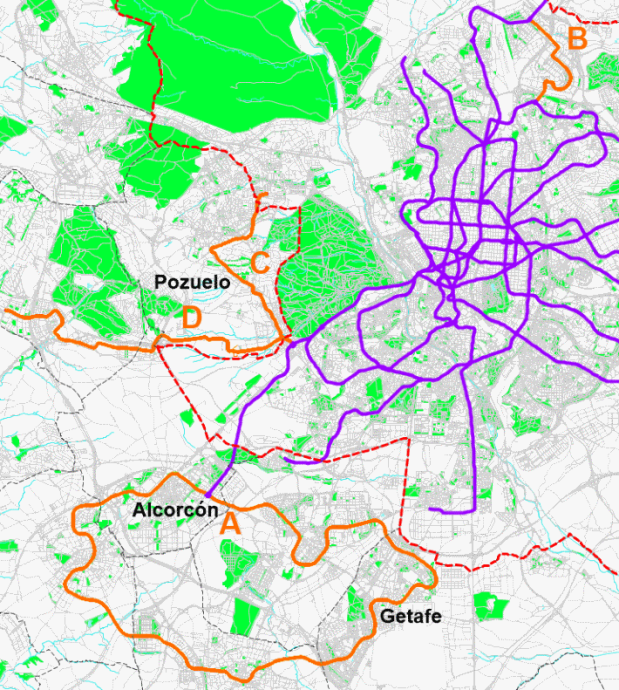 Three tram lines have been added recently to the network. One covers the new residential developments on the northern part of the Madrid municipality (B), and the two others cover the low density developments to the southwest (C,D); a still reduced occupation rate at the northern housing areas and low densities on the southwest make for a complex economic management.