What is the use for an automobile? This seemingly simple question, whose answer seems evident, lies at the base of a relevant part of the debate on urban planning in many countries, even if it is almost never asked in those terms.

We own a car, used essentially for out of city travel; I am lucky to live near the center of Madrid, at just half an hour’s walk from my job, so I walk nearly all days. It’s faster and way cheaper than to use a car or even public transit (which is common for such short distances). Sometimes we use our car to go to peripheral big box retailers, but most of our food is bought in the neighborhood, and for more specialized items we usually at least browse the central Madrid stores, a convenient collateral of working in the area.

Sometimes I use my car to get to working meetings in places in which there is no convenient public transportation link, but I usually prefer to take a train or a bus, because travel time is better and I can work during the journey, something quite useful to manage my working time.

But not everyone does things as I do. The car is quite used in metropolitan Madrid. A sprawling growth pattern for housing and jobs contributes to that. Even if the classical planning theory says that there should be a balance between jobs and working age population in all municipalities, this goal is hard to attain when contracts are not kept for long times, a growing issue these days. Besides, shopping systematically in big box peripheral retail centers also increases the car traffic. On the other side, a sizeable group of citizens prefers their cars to public transit to avoid lengthy transfer times, or simply to avoid “smelling the sweat” of other travelers.

Madrid municipal statistics show that in 2010 there were 2.541.000 vehicles on the street on an average day (a bit more in june, but 25% less in august). Most of this traffic (nearly 20%) concentrates between the M30/Calle 30 Beltway and the inner avenues subject to traffic lights. The average speed is on the whole 24,16 km/h (less than half in the older part of the city, up to 67 km/h on beltways).

Average daily intensity of traffic in central Madrid, by streets 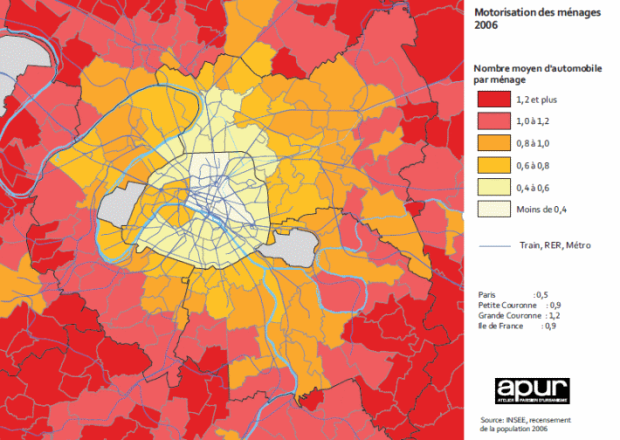 Cars per household in the parisian region in 2006 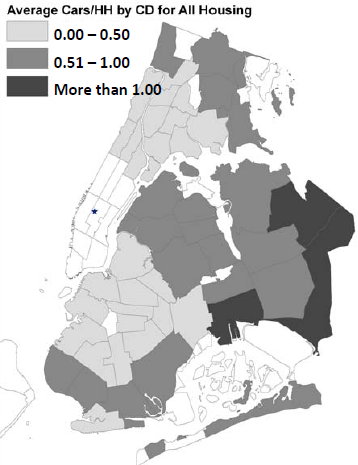 During that year 865.000 cars used public parking. In the streets subject to park meters the average parking spot was used by two cars a day, each staying less than an hour.

The relation with the car varies from country to country, but essential issues defining it include urban pattern, availability of alternative transportation, available income and normative framework. Cities in emerging countries as Mumbai have car ownership rates much lower than in Europe or North America, but they are growing; and even with such low car ownership rates vehicles can be a nuisance, as the citizen group Casablaklaxoon shows in Casablanca (Morocco).

The requirement for parking inside buildings is still enforced in central Madrid, while in central Manhattan there is a less straining specific rule since 1982.

How do you use your car?