Some days ago I found an interesting article on « The Hindu » newspaper concerning the urban policies of that Asian country. According to assessment of seven expert committees ahead of the 12th Five-Year Plan (India uses this kind of instrument), Indian cities are in such a situation that they face the risk of a severe degradation in their conditions.

The assessment indicates that the institutions are being unable to cope efficiently with the rapid growth of cities , as they define rigid, un-comprehensive and socially unfit plans. The country has today some 377 million people in cities, and estimates show that they will grow to reach 600 million in 2031, worsening the already complicated current situation.

Experts have proposed some strategies, including a national spatial strategy, regional plans for the metropolitan areas, greater flexibility in local planning, an urban densification movement and the devolution of planning powers to local bodies.

Beyond other critiques that can be ascribed to the national political debate, and the question on how some ideas that have been already proposed several times have not been implemented, what has been interesting in this article is the debate on urban density.

The assessment states that the Indian cities planning define low floor-space indexes (of floor-area ratios), implying an inefficient land use; it is an idea I have read almost literally (concerning Indian cities) some months ago in  Edward Glaeser’s “triumph of the city”. The Hindu’s journalist indicates that Mumbai and Chenai have FSI of 1,33 and 1,5, but in fact are among the most densely populated areas in the world.

Some notes come to mind when reading this text from my geographic position:

–          Some parts of the text could be used to describe Spanish cities as Madrid in the 1950s, with fast growth beyond any forecast and enormous urban deficits that went unsolved for 30 years.

–          The debate on density must always be based on a clear definition on what is being measured. The density at the lot scale is not the same as the one on the neighborhood scale, which integrates streets, green areas and other public facilities as schools. On plans we are making in Spanish cities, it is sometimes surprising to find that areas generated as slums, with just one or two stories, get to higher overall densities at the neighborhood scale than more formal developments with five or six stories heights.

Increasing density as a numeric figure, without thinking on the volumetric outcome and what it means in terms of access to the sun for each dwelling and of provision of public facilities, can produce as unsustainable results as low densities. The Kowloon walled city in Hong Kong, a 30.000 sq m that reached a 33.000 population in 1987 (more than 1,25 million per sq km), being demolished shortly afterwards, can be seen as a cautionary tale. The problem is not so much in increasing density, as in managing the transition from a very subdivided property structure and allocating to each owner a part of the needed improvements. 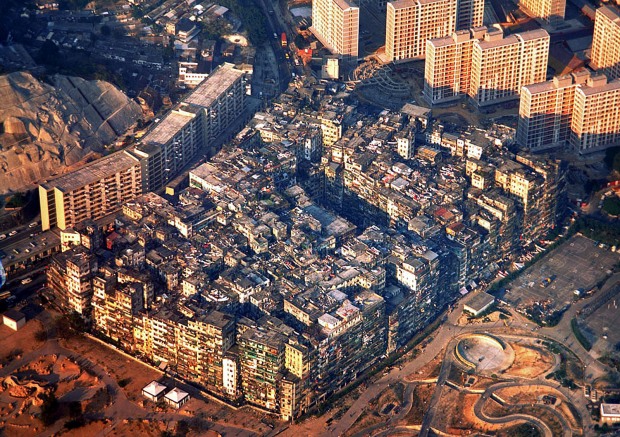