The book attempts a new method to combine objective and subjective information in a more coherent way, focusing on the most relevant dimensions of quality of life. Two basic criteria are used: the market price of housing (sale or rental) and the indidivual’s life satisfaction. These two approaches are used in a complementary manner to answer such questions as:

Using housing prices and indiviual’s life satisfaction as indicators means that the ranking of cities loses relevance, as these elements are much more interesting in an intra-city approach, comparing diferent areas (e.g., housing prices usually reflect somehow differences in the access to quality infrastructure or the safety level of neighborhoods). Besides, the point of rankings comparing diferent cities for the above-mentioned higly mobile top notch exective is clear, as they have a real chance to move from one city to another in a relatively short time lapse, but this is not what hapens to most city dwellers (even if these rankings are often relevant to foster evolution in urban management). There are tangential approaches to subjective satisfaction/ happiness studies, a rising field of research, albeit probably one subject to debate. The urban security issue, quite relevant in most of Latin America, and the quality of housing, are also debated. 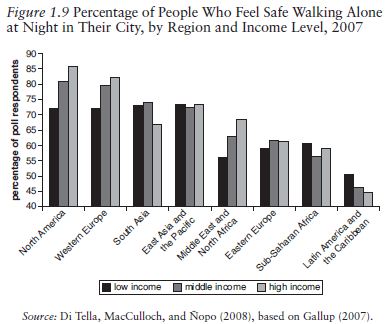 The case studies focus on Buenos Aires, Bogotá, Medellin, San José, Lima, and Montevideo. As Latin America is the only region in the developing world where the majority of the population lives in urban areas (77%), the study is quite pertinent to the region, but many methodological aspects could possibly be translated to other geographical regions, as quality of life is a central issue for a good urban planning.