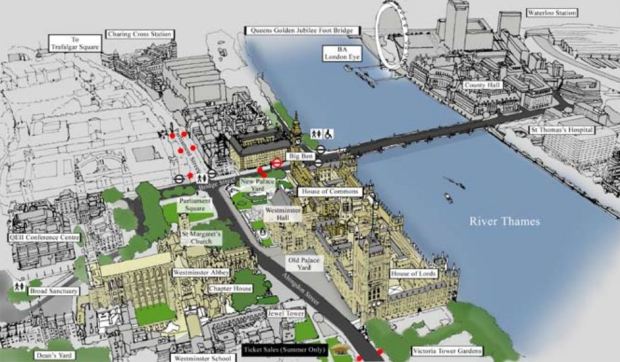 The site and its surroundings, according to the 2007 Site Management Plan proposal

The Abbey and Palace of Westminster, together with the Saint Margaret’s church, were inscribed in the World Heritage List in 1987. The Universal Outstanding Values recognized to the site are the fact that the Abbey represents the evolution of the English gothic style, its influence on the XIXth century gothic renewal through the project for the Houses of Parliament, and the illustration of the specificities of a parliamentary monarchy for nine centuries.

The area is subject to several complex issues: on one site the safety ones. According to the State of Conservation Report prepared by UNESCO in 2012 some security measures deemed un esthetic have been recently replaced by street furniture of bomb-proof quality, and a diversion of traffic away from Parliament Square is being studied to turn it into a pedestrian area. There is also the location at the center of London, a city with a dynamic real estate market, so the chances for a conflict between heritage preservation and  new architecture are a real issue: the 2012 UNESCO document shows concern about the Elizabeth House project, by David Chipperfield. And in many world sites the London Eye, in such a nearby location, would raise debate.