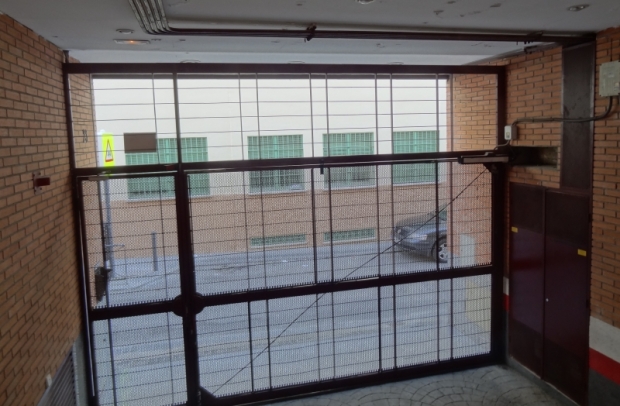 A garage door in a small appartment building in Spain

At the dawn of the XXth century the car appears. Up until then people move around cities walking or by horse. Urban families with horses or other transportation animals, usually expensive, were a minority. The advent of mass car and its expansion through all the social layers implies a new dimensional problem; a horse is quite smaller than a car, and even a horse vehicle can be more flexible in dimension.

A horse box can be some 3×3 m, as the animal is seldom more than 2 m long. If you leave some horses temporarily tied to a post in the street, they occupy even smaller spaces; if you consider carts, things can be a little different. Alongside cars, bikes appear with an even more reduced footprint.

A current car can be some 4 to 5 meter long, with a total width of 2 m considering lateral mirrors. The biggest difference when compared to the horse in urban terms is that the animal usually belonged to a firm or a family with a firm, while automobiles are now in almost each family, and they feel the need to have them near their homes. So going from horses to cars is not so much a public space congestion due to moving elements, as you can see in historical photos from before the car that street where packed with all sort of contraptions; it is rather how to park a much higher number of vehicles in a distributed way through the city.

Around 1990 only the rich had a carriage; most homes had no space for vehicles. The first bylaws requiring a parking space associated with a home are usually from the 1960s-1970s, when cars became really massive in Europe and North America. And here comes architectural typology; in single home areas, with large lots, the garage finds easily its place as an ancillary building, or you park on streets that, due to the low density, have no great problem. The biggest problem comes with vertical homes. Using the block core is a solution, but one that comes at the cost of the demise of that core as a residual space. Burying the garage needs ramps of a certain length, and space is not always there. Adapting older buildings, mainly ones on small lots, is often impossible.

Today there are two visions, in a moment in which (at least in Europe or North America… and well, mostly nowhere…) horses are no longer an alternative. Some call to retain the current quotas defining a mandatory parking provision related to the number of homes, even if sometimes the same administration that enforces that rule later allows developers to sell to different buyers parking lots and apartments, so creating a pressure on on-street parking as some prefer to avoid the high cost of an in-building space. This option leads to a persistence in the creation of a car-centric infrastructure. Meanwhile, some demand the end of such mandatory quotas; this would not be a prohibition of in-building parking, but as it would no longer be a mandatory space, it would be added to the planning-allocated buildable floor area, so developers should choose between apartment space and parking lots, giving a different voluntary quota to different neighborhoods.

In short, a technological evolution that has changed many things in cities, including typologies.