Frejus Aeronaval Base, with 135 hectares, near Saint Tropez, was created in 1912 as a nearly-experimental center arround a new weapons system: seaplanes. It was also the barracks for marine troops, and its operational life was linked to the colonial wars. In 1970 there were 800 military and 130 civilian personel, but in the 1980s the base lost gradually its relevance (in 1983 personel was reduced by 30%), being finally closed, transfered to the Frejus Municipality and open to the public in 1995. Its location at the mouth of the Argens, a 1,5 km beach and a relevant biological heritage lead to its conservation without new buildings. Hangars remain for sports uses. There are 900 parking spots, altough the original landing ground is not included (in the google photo there was probably an extraordinary event). The area is used by locals and tourists.

The management of the transfer operation was under singular conditions: François Leotard was simultaneously the Minister of Defense and the Mayor of Frejus, so probably negotiations were simple. The French Court of Audit estimated in 1996 that the 50 millions francs paid by the commune where under the price the Minstry coud have received, and that the agreement was not enough protection for some areas, including the coastal strip, that was not ceded to the Conservatoire du Littoral, the national establishment conserving these areas. The base was named after the former Minister in 2007.

I visited the area as a tourist in 2009, and it is a quite pleasant spot, the old airfield being extensively used for cycling and skating.

The bay of Saint Raphael as seen from the Base 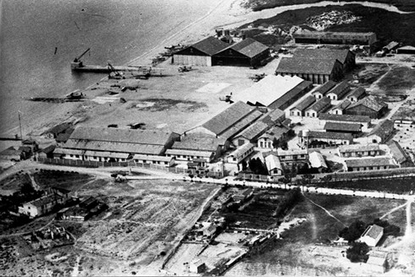 The initial moments of the base