Azca, a large offices complex in northern Madrid with all the flaws of the “slab” planning of the 60s 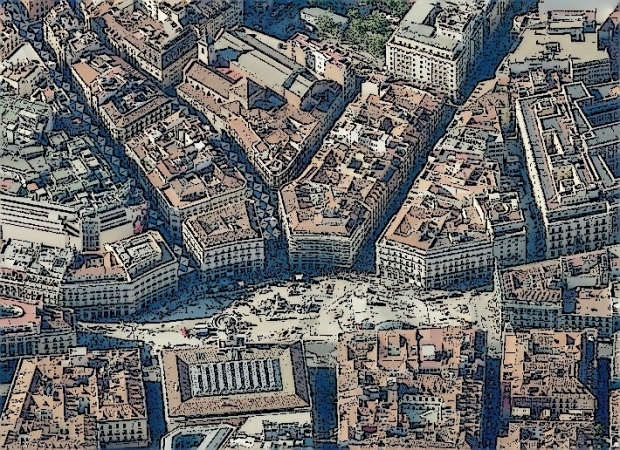 Puerta del Sol and its environs

Two central nodes of the Madrid metropolitan area, with a sizeable role in terms of image: the old city and a 1960s bussiness district. In 2006 the Puerta del Sol had some 6.000 residents, 24.000 employments and 2.455 bussinesses, retail activities meaning 27% of the employment; in 2010 the total employment had decreased slightly, and retail employment meant just 23% of it. In 2006 AZCA had 1.226 residents and 49.353 employments, 11% of which where in retail; in 2010 the jobs number had decreased, overall and in retail, more sharply than at Sol,but retail jobs had risen to 13% of the whole.

During that time the number of jobs in the region had risen less than 1%, but retail jobs fell slightly. Nevertheless, these two spaces keep a role as metropolitan centralities, in which retail is relevant, but no the only function.