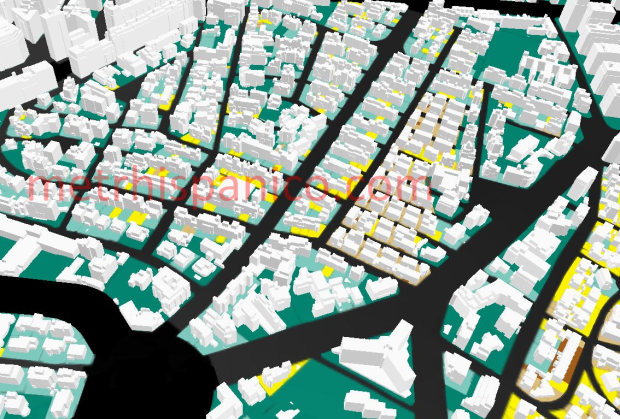 El Viso as seen from the south, according to cadastral data

El Viso is a residential area built in Madrid in 1933-1936 according to the 1925 Low Coast Housing Act. It never really was a worker’s neighborhood, as it soon became an area for middle classes and intellectuals.

El Viso. Lot area (in sq m). Red circles are proportional to the residential floor area for each lot

Nowadays it is a kind of anomaly just by the denser area of Paseo de la Habana- Castellana. The original terraced homes have changed, gaining some levels here and ther, and some are now the location for other uses. However, the layout and the feeling of low density are still there. You can judge yourself thanks to google street view.

El Viso as seen from the east, according to cadastral data. On the background the AZCA towers show their presence.

A façade on the Calle de Alcalá, Madrid

The façade is just a face of the reality, as it is often rather mute when it comes to describe how deep the building is, or how it relates to the core of the block.

Façades around the corner of Menendez Pelayo and Menorca, Madrid

Façades around the corner of Ibiza and Menendez Pelayo, Madrid. A wider street, a diferent relation 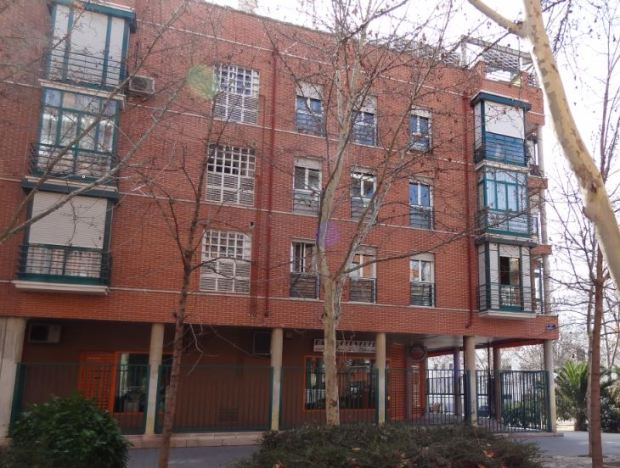 Imagine you are a city or any other public administration with urban planning powers. How to foster the use of a given architectural shape without paying for it? Reducing the cost for those producing it. In a given moment, the city of Madrid decides that the floor area of a bow window is accounted for just about 50% of its size in the overall floor area permitted by the municipal plan on each lot. So it is a more profitable space than other square meters in the building. This explains why you so often this shape in the Madrid architecture of the last two decades.

Is this a better architectural solution? A more elegant one? You cannot say, as this depends on each project. Conversely, some cities as Barcelona are much less welcoming towards these bow windows, and this has been a tradition for more than a century. It is a matter of local sensibility… Barcelona’s position derives from the overcrowding in the old city before the Cerda extension in mid XIXth century, when cantilevering rooms sometimes covered the street. I could not trace back the reason for Madrid’s permissiveness.

The arrival of the fridge as a common home appliance implied, among other consequences, the evolution of the place of the animals in the city. My grandma still had chicken under the kitchen sink in their third ground apartment, as  during the Spanish post-civil war era this was still common (most urban dwellers came from rural areas, as her), and she had no fridge at home and retail was not up to the task of massive meat distribution. To be precise, at a given moment they bought a fridge, but power lines were not reliable enough…

Which leads us to a previous matter: the spread of electric energy. The generalization of electricity in the cities is a matter of little more than the last century, with a gradual growth: first light, and then an incremental growth of the rest of appliances. The urban family revenue had to grow to support buying new appliances, but power generation and transportation networks had to grow in terms of both capacity and reliability.

This expansion of electricity is central to the link between animals and humans in cities in many ways, and in Europe there is a clear example in the production and distribution of dairy products. Since Pasteur it is known that milk is an ideal place for pathogens to thrive, especially when time between milking and drinking grows and temperature is uncontrolled, so up to the generalization of railroads the strategy was to bring the cow as close as possible to the citizen. Cities as Madrid or Paris had at the end of the XIXth century a large amount of “vacheries”, small places in which cows were raised to produce milk for nearby populations, sometimes in ground floors or inner courts in what now are posh areas. Some examples as Louis Bonnier’s time architectures in ceramic tiles show the convergence with the expansion of urban hygiene.

The improvements as well in transportation as in refrigeration both on the offer side (industrial fridges) and the demand side (a fridge for every family) reduced with time the need for cows near families. Along with the end of urban horses due the car, this is a relevant evolution. It is worth thinking how in today’s polluted cities a quality milk production could happen, but anyway this urban story also had implications for rural areas: while the milk production in former times could only be exported as cheese, with power and fridges an industrialization of the milk industry ensued.

It would be interesting to see, in the recent context of avian influenzas, how the way in which humans and fowl evolves in Asian cities with fast GDP, infrastructure and population growth, as a century ago in North America or Europe.

Madrid becomes the Spanish capital in 1561, and this implies the institution of the the “regalia de aposento”, making mandatory for citizens to provide half their own homes to provide shelter for Royal officials. It seems that municipal authorities agreed with the King this provision in exchange for the benefits of becoming the permanent capital of the country. This fee was established in the middle ages, when the court was moving from city to city, and it was a transitory problem for citizens, but by making Madrid the permanent capital this became a nuisance that influenced architecture.

Every home was subject to the mandate, but some had dimensions or arrangements that complicated divisions. As a result, citizens decided often to build homes that could evade partition, and this led to the name of “malice houses”. Anyway, these homes were subject to a monetary fee, so there was first a need to institute a tax raising office, and later to create, in the 1749-1759 period, the first city cadaster.

You can consult on the internet a full compendium of the legal texts on the issue… from 1738. As often in past texts, it is quite interesting to read the description of the kind of royal officials that had a right to shelter…

A translation of the specific text on the malice homes (page 28 on the electronic text) would be:

“in any home that can be easily divided in two parts, and that is in this city of Madrid, where the Royal court is, the half belongs to its Majesty as a result of the shelter rights… , and those that cannot be divided as they have just one room, an appraisal of their product must be made, and the owner will contribute with a third of it to the shelter rights, leaving to the owner the spaces from a third to a half, that he should give; and those homes are called of difficult partition, of third part, or malice”.

So evading a fee did led for a long time to an architectural production in Madrid that was defined by one level, one-room homes. Sometimes there were rooms on an upper level that was not visible from the street, and in some cases the homes were deemed indivisible due to their internal divisions. As a conclusion, neighbors preferred a bad architecture to a fee on their privacy.

The Retiro park appears as a peripheral hunting ground (not unlike other parks in many European royal capitals), east of the Prado creek, by then the urban limit of Madrid.

The Texeira map shows that garden as related to an essential part of its ensemble, the Palacio del Buen Retiro, now disappeared (not unlike what happens in Paris with the Tuileries garden and the palace that disappeared during the Commune). The Palace was on the natural ramp ensuring a clear link to the city; nowadays the Jeronimos neighbourhood and the Prado Museums compound have substituted it.

South of the park the urban limit is much less clear; the Observatory sits atop a cliff facing Atocha, while north of Reina Victoria street the urban fabric is confuse. The south section of Menéndez Pelayo shows clearly the differences in level, but along the northern section and Alcalá and Alfonso XII the park is at street level. The park is not a flat platform, as the Palacio de Cristal shows, but the elevation variations are reasonably integrated in the design.

The area as seen from north. The Palace is the mass under the dome of La Almudena, on the left.

The Royal Palace of Madrid stands on a platform 55 m higher than the Manzanares bank. I once heard that the initial plan submited by Filippo Juvara, the architect, was for a building with four main courts, but that it had to be reduced to just one as there was such a steep slope (contour lines were still in the distant future, so such projects were not necesarily easy when made from a distance.

The level difference between the Palace and the river is solved through garden platforms; a new project now being built, the Royal Collections Museum, just adapts to that gap. Just south of the platform on which the Palace and the Almudena Cathedral are is the Viaduct, an urban bridge which has been for years a choice spot for… suicide, taking advantage of the difference in level.

A 1 m interval contour map with a 100 m grid. The river area is not acurrate, as the source data was probably collected during a recent works period

Preliminary works for the Royal Collections Museum, as portrayed on http://www.edicioneslalibreria.es/la-historia-de-madrid-bajo-el-museo-de-colecciones-reales/

Current state of the Museum

Any large city can have a complex setting, altough it is not compulsory (just think of the Randstat, Shanghai or New Orleans). Madrid has a certain terrain complexity, defined by the Manzanares (a quite tamed river), and the Abroñigal and Castellana creeks; Abroñigal is nowadays a corridor for the eastern M30 beltway and Castellana is the main north-south spine. The historical city began on the steep slopes of the eastern shore of the Manzanares, to later grow towards the east. 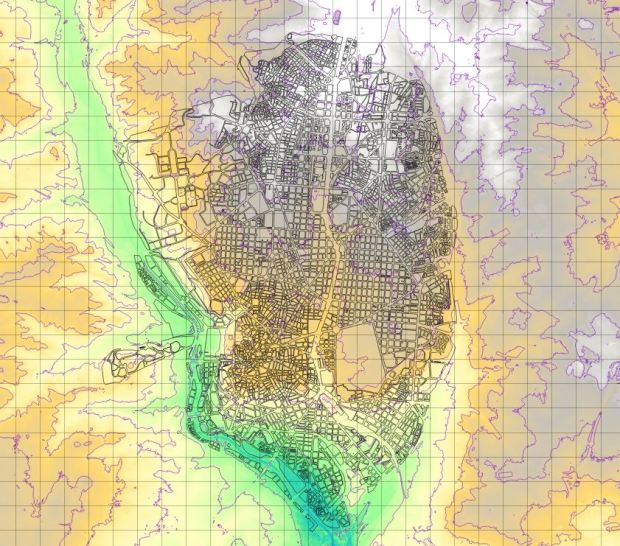 The central city on its setting 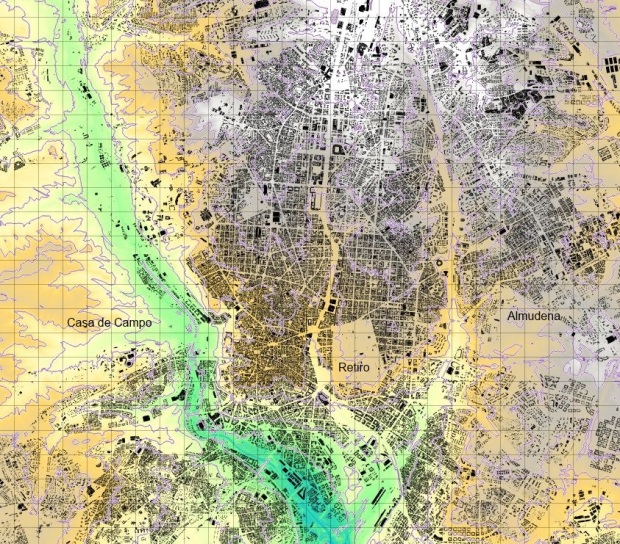 All the buildings (sort of…)

Cities are 3d realities, even in the flat Netherlands. So where you are is not just a matter of planar coordinates, as the landscape changes according to the relative height of every element: trees, buildings and the ground itself. This is our next subject in Madrid, a city that has a certain “altimetric diversity”.

The Municipality of Madrid publishes every year a report on the building rights defined in the current General Plan that are still to be used (edificabilidad remanente). As a result of the current economic crisis (which at least in part is due to an excess housing offer as related to demand), their numbers as of january 1, 2014, are (for a city slightly over 3 million residents):

So there is still a large amount of potential job for everyone involved in city building; but where are the people that will populate that, work in new factories or office cubicles, or buy in new retail spaces? therein lies the rub… This capacity can be seen as an asset for the future, which is unpredictable in itself. But it seems a long term future.