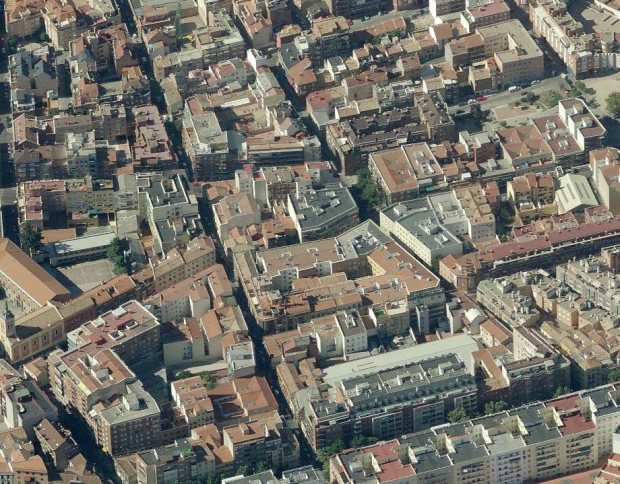 Berruguete is a part of the old slum of Tetuan, which appeared in 1860 after the african war, when colonial troops settled north of Madrid. The neighborhood uses as a reference the Bravo Murillo street (A-B), the old trunk road towards France. A clear sign that this was an unplanned settlement is the lack of large structure axis but for the old trunk road: these axis are being materialised still in our days by opening through the urban tissue, as the calle Marqués de Viana (B-C), or they are more a historic trace than a true element with an ability to organize the urban landscape, as the Paseo de la Dirección (D-E-F-C, the Direction’s trail, so called as it was the path followed to inspect the Canal de Ysabel II, which bring to the city water from the reservoirs up on the sierra de Guadarrama).

How to explain the increase in density that seems to have happened during the last decade? Tetuan, as a slum, resulting from informal urbanism, was historically, but for the strip around Bravo Murillo, which densified over time, mainly an individual housing area, with just one level built; just remember that around the time Tetuan was founded, the law for the Madrid Ensanche is passed, so two models appear, one formal and following the rules, and the other serving the newly arrived citizens that had scarce economic means. For the last decade, the real estate bubble that has led to the current economic crisis has reinforced a densification that was already in progress, and small buildings on small lots have increased density substantially, profiting from what today is a central metropolitan location. Be it through newcomers or through the sons of the neighbors, the neighborhood has also increased its population. The lacks of public facilites and green spaces has usually been covered in neighboring areas, as in Valdezarza.

233 dwellings per hectare is probably just a number to you, so it is interesting to compare with a diferent area within the same density range: The Eisenhower area in  the Quartier de la Croix Rouge in Reims, France (page 62 on Habitat- Formes urbaines). In Tetuan building heights are usually 2 to 5 levels (the planning allows for a height still not completely adopted), while in Reims the average height is ground floor+7, with even parts reaching ground floor+18. Why? Because in Reims you have wider streets, green spaces and public facilities. This does not imply that there are no similar exemples in Madrid, or that there are not old faubourgs like Tetuan in french cities.

The most common surface range in the appartments in the Berruguete area was in 2001 from 46 to 60 sq m, with an average surface of 65 sq m; in Reims the average surface was 100 sq m, so there is also a part of the height difference to be attributed to better (or at least larger…) dwellings.