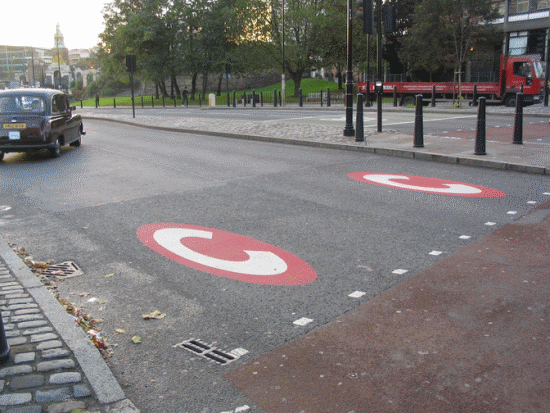 Why would you want to count the cars in the city? To be able to dimension properly your street traffic lanes, either to enlarge them or to keep them in such a state as not to increase congestion by appealing more traffic, as often is the case in enlargement projects. Usually measures are taken on a limited number of streets which have a structural role and concentrate most of the cars, without deeming relevant the traffic in smaller streets.

But there can also be a clearer incentive: to levy a tax for using the public space, a rare commodity, and so subvention public transportation. This is the policy instituted in London in 2003 with the Congestion Charge. The system works from 07.00 AM to 06.00 PM, Monday to Friday, with some holidays being exempt. There is 90% reduction for residents. The system depends on 197 cameras along the area’s border, integrating a plate reconnaissance software that allows the charging and fining; as vehicles are bulkier and follow more predictable rules when moving, the cameras are more reliable here than to count people. There are similar charging systems in Singapore and Oslo, and despite the problems that prevented a similar option to be enforced in New York, San Francisco is on the way to apply a charging system.

The system has reduced around 30% vehicles accessing central London, according to Transport for London. The company knows how many cars use the system each day, and results are published monthly on http://data.london.gov.uk/datastore/package/vehicles-entering-c-charge-zone-month. The sharp decrease in users from 2011 is due to the removal of the toll in the western extension