Congestion Charge, London’s urban toll system, is among the rare cases in which a politician states his admiration before a measure that has worked better than forecasted (at least that’s what he said to the BBC).

Let us use here what some urban economy teachers say. Imagine an ET hovering over planet earth, and how he could be puzzled to see our behavior on car flows; you pay tolls to use motorways that seldom have any congestion, while in large cities, which can put to test anyone’s patience, moving by car is free. The scarcity of a good (fluidity) does not influence its price.

This first idea deserves some considerations: since the introduction of parameters and (especially in Europe) air quality control measures, moving your car in a central district remains relatively free, but the moment you decide to stop and park, you are in for a step bill. This helps improve air quality, but is felt by some as a social division between haves and have not’s in terms of accessibility to urban cores; I think that this is not necessarily the case, as in a reasonably designed public transportation system fares are always much more affordable than car ownership. Sure, you have all the right to feel better in your car, as you have no need to smell other people’s smells, but you have no need to organize your trip according to parking availability and you can do many useful things (even just thinking) while someone else focuses his/her attention on steering a vehicle. I think it’s rather an issue of what you want to do with commute times that can be very long for some, and feelings, but access times are not necessarily longer for the most (sure, if you make many stops things can change, but you need to factor in the parking hurdle).

It seems the system has worked rather well; tariffs have helped boost public transport, and reduce pollution with positive effects on public health. Citizens, as on almost any other issue, are divided between pros and cons. Traffic levels have gone down 10,2% in 10 years, but travel time remains the same for motorists.

An interesting thing in this measure is that it was approved by a Labor government and presented by some as a left wing interventionist policy, but later has been maintained by Conservatives (even if they scraped the western extension), and new restrictions are being planned for 2020.

But few cities have followed that path: more often than not, the fear of losing votes.

Yesterday I saw the end of the film « Tracks » (2013), which renders the story of the 1.700 miles trip that Robyn Davidson made from Alice Springs to the Indian Ocean (Australia) in 1977. The plot describes how the teenager prepares for a solitary trip, along four camels and a bitch, and the travel experience in the desert; there are some parallels with castaway stories, as “Life of Pi”, and in visual terms the film is a treat.

What interested me is a detail. Due to the way in which the story develops, there are many farewells. But the most relevant are not those in which someone gets on a vehicle to go away, but those in which the character simply walks away normally. Some minutes later I saw some minutes of “Jane Eyre” (recent version, same actress). And again the same situation; the character alone under the rain in the middle of an English moor, just walking. As when in the Bible there are descriptions of the distance by foot between villages. Some days ago I also saw a part of a Polish film, “Aftermath” (2012); it Is about a horrible story (a 1941 pogrom as seen from 2001), but the interesting thing in this context is the way in which the two peasant brothers (one freshly arrived from Chicago, where he lives) move by walking most of the time, sometimes over long distances.

From a “simple” point of view, these stories would be impossible in such a country as the United States, land of the car, with cities without sidewalks (I say simple as reality is probably more complex, and not only there)…  but there is more to be said when it comes to shoes…

In Bologna the arcades, a singular element in other cities, are a systematic feature. Not that they do not exist elsewhere, but here you have more than 40 km of them, and nearly any stroll in the historical core can be done through them. In many cities, they are an element complementing the sidewalk, but here they substitute it almost completely. This implies that sometimes a pedestrian does not see clearly the vehicles until he decides to do it (not necessarily a good thing), but also that anyone stopping a car must be more attentive. During winter, if ice appears, sunrays do not touch the pedestrian area, so there is a risk of slipping, but if there is just rain you are covered. Compared to other historical cities there are very few sidewalks, and even pedestrian streets, but when you walk you feel much more protected; even if they wished to do so, cars and trucks could not occupy the pedestrian space but through unusual means.

It seems the arcades appeared during the XIIth century, when streets were wider, as a solution to extend buildings to cope with a surge in the university population. In 1288 a municipal ordinance made brick or stone arcades mandatory for any building, even if today some wooden arcades remain. The key measure were 7 Bologna ft in height (2,66 m), enough to allow the passage of a man astride his horse. In law terms, it was a compulsory easement by which the public use of the arcade was guaranteed and it was to be kept in good use by the building owner, in exchange for the right to use the spaces in the floors above. As a compulsory architectural element in any building, it has taken varied shapes, in palaces and in humble homes, with a large diversity. 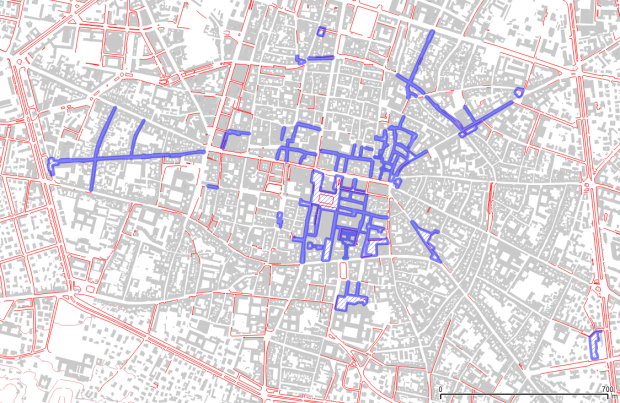 These arcades have also probably survived due to another factor: compared with other historical cities penalised by a position atop a hill, Bologna’s historical core and its surrounds are almost flat, so pedestrians have it easy.

The Danube near Vienna, as seen from Khalenberg Hill

For those that have followed this blog during the last years, here is the proof it has not disappeared. Just a small fraction of that time was a break (most of it was quite the opposite…), but it was worth it.

During that time I have seen and thought about some interesting things, either on travel or through other means. Here are some, which can be viewed as a thematic layout of future posts:

A view from TVK’s site

I had read that the Place de la Republique had been renovated ; I saw it from a taxi and was underwhelmed, as it seemed just a renovation of the ground surface. The reason for that first impression is that I had never gone there before. A square that was in fact a giant roundabout has had its traffic concentrated on its southwest part, giving continuity to the pedestrian traffics towards the northeast, changing many things.

The square is 280×120 m, one of the largest in Paris. The project is launched in 2008, and Trevelo & Viger-Kohler (TVK) win the architectural competition. Cars are moved and the square becomes a single platform including also a first section of the rue du Faubourg du temple. The statue of the Republic has been integrated on the pedestrian platform, which has been paved with large stone slabs. Some have complained about the removal of some urban art elements from the XIXth century, but overall the square seems to be work well as a public space (some kind of meadow could have been an idea…)

The project, completed in 2013, is available at http://www.placedelarepublique.paris.fr/ 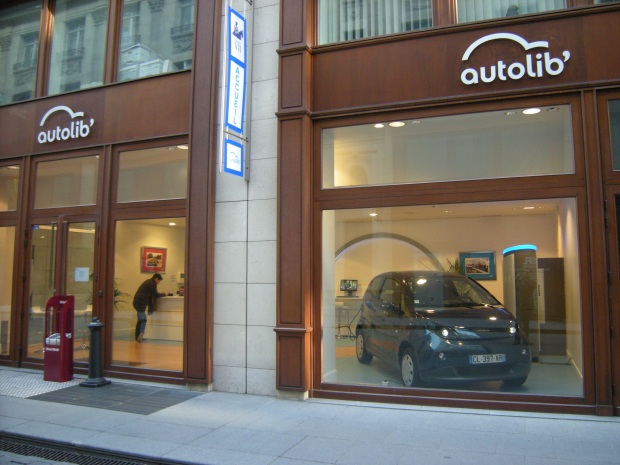 The image is that of yet one more car dealership. But it is something else. After having developed a bike location scheme (velib), the City of Paris has begun a pioneer project: electric car renting. The idea has some attractive elements: for many Paris residents car ownership is not so practical, but rather a chore, having to pay high parking prices and car maintenance for something you finally use just some days. A number of parking spots on the streets have been reserved for this system, in which you take your car at one station and can leave it at any other in the network. Besides, the high initial cost of acquiring an electric car is balanced, favouring a technological evolution that reduces greenhouse gas emissions.

When you see these cars on the street, they see prematurely old and not that well-tended, but they seem rather useful for their public, that could be more important than you could think at first sight. It seems Indianapolis has been convinced… 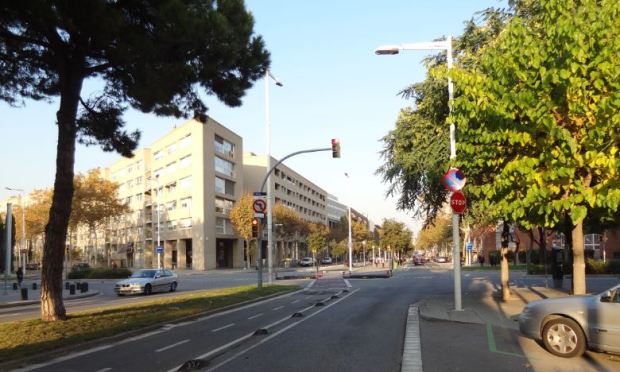 Sometimes I’ve heard girls complaining that sweets are like “ a minute in your mouth and a lifetime in your waist”. CO2 is a bit like that, but on the other side.
Some years ago we produced a technical paper for the Basque Government on climate change and urban planning. A fast calculation showed that in the current climate context of the Basque Country a hybrid car’s worth in CO2 emissions running at 110 km/h was equivalent to six months of carbon capture by a mature European beech. This back of the envelope figure was in fact more sophisticated, and based on several science documents including specific studies on the growth behaviour of different species and other factors. On the whole of the Basque Country (both a well forested and highly developed area by Spanish standards) forests were worth 2,9 million tonnes of CO2 capture by year, while the global regional emissions were some 20 million.
Back of the envelope calculations must be handled with care in climate change terms, as there are many confuse data, not always based on good will. Concisely, trees absorb CO2 to grow, and this CO2 goes to wood mass and in part to the soil; the metabolism of the plant defines how fast that plant grows, so a given species could have quite different behaviours as CO2 sink in Maine compared to Madrid or to Manila, as climate and soil qualities matter. In the end, buying car enticed by the fact that a tree will be planted to absorb that CO2 seems quite untrue; you could choose to drive just a few minutes a year, but I’m not sure this is the case. In the end, we are not that far from the kind of ad strategy also used for… cakes.

Each appartment has its own conditions…

Rules are not just established by planning, but also by building codes or the demands of the market and the technology of the everyday products. Nearly every car is created with similar dimensions, but each home has particular conditions.

The article published on the Atlantic Cities magazine (which I read thanks to its reference at salvolomas) shows the antagonic interests at play when it comes to the future of an urban freeway. The balance between impacts and benefits of an infrastructure project, again a central issue in the planning of urban space.

The TERM 2013 report by the European Environmental Agency (which can be downloaded at http://www.eea.europa.eu/publications/term-2013) analyses the effects on environment of the transport policies, considering the targets, the EU has established to reduce greenhouse gas emissions.

These targets are linked to policies set to promote public transportation and non-motorised mobility. It seems that emissions linked to mobility are smaller than the targets established for each year, a positive outcome; but overall emissions are still 25% over the 1990 levels used for targets. Urban pollution problems caused by nitrogen dioxide are relevant and growing due to the expansion of the share of diesel vehicles in the overall fleet.

The report confirms that the cities in which public transportation and non-motorised modes are strong have less pollution and produce less greenhouse gases.