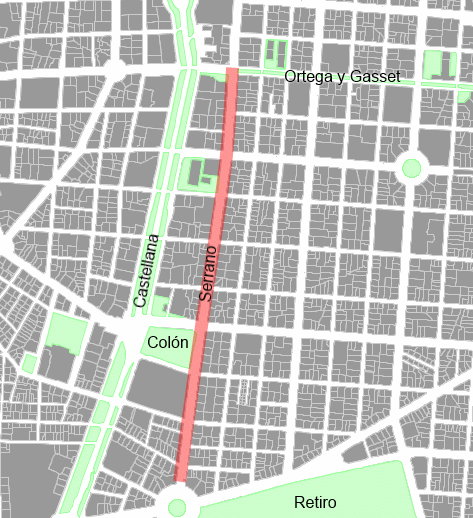 Serrano is one of the thoroughfares of the barrio de Salamanca, the Madrid extension of the XIXth century which is today one of the most powerful central areas of the city in economic terms and as an icon. It is a street in which choice, selected goods (apparel, shoes, luxury) shops flock, as well as high end office space. Its location near the Castellana, but with a width substantially better for retail and other activities, and the presence of an also sizeable retail base in adjacent streets, from the luxury of Ortega y Gasset to more stratified price ranges, lead to a concentration that can be compared to that of a large edge-city mall. One of the most interesting sections, even if asymmetric (no buildings to the west) is that of Plaza Colón, which concentrates some of the most exclusive shops (ant the images of this post).

Serrano has been refurbished with works ending in 2010; on street parking has been eliminated (creating a large underground parking), a bike path has been incorporated to the sidewalk, and the design of the floor surfaces, tree pits, benches and other elements is specific.