In the beginning, there was a bullfighting ring, with a wide, alas short, avenue focused on it (a bullfighting ring placed in a city block in the middle of a grid gives you scarce chances for monumentality).  But the ring disappeared, being substituted by some housing and a large sports venue (D on map).

Department stores came (There are two large El Corte Inglés centers on A and B on map) and cars also came. During the 1970s there were still cars circulating, as on any usual avenue. Someone had the idea to make an underground parking, and towards the end of the 1980s, to pedestrianise that avenue, that, in the end, led to nowhere. There was even a sculpture by Dalí…

With an underground parking the square could only have trees on the sides; this is not really something strange in the Castillian culture, but in fact the Madrid summer made it a hard space to live, in a location so close to a huge retail centrality which is very well connected (public transportation hub on C on the map). Some 10 years ago there were already talks about the need to civilize that space, and finally a few years ago Patxi Mangado’s project was finished. The paved surfaces were changed, and some trees were planted on the western part, using elevated platforms on the parking slab.

You can certainly have trees over an underground parking; but it is rather complex, and the long term evolution of this kind of central spaces on cities is more compromised than it may seem.

The Dali sculpture in the eastern part of the square looking towards the west.

The northern edge of the square, by El Corte Inglés.

A tree which is on “real ground”. The tree pit grid is quite limited.

The square as seen from the west looking east.

The trees on the western part of the square. The “plugs” on the sloped granite are a “solution” against damage by skaters. 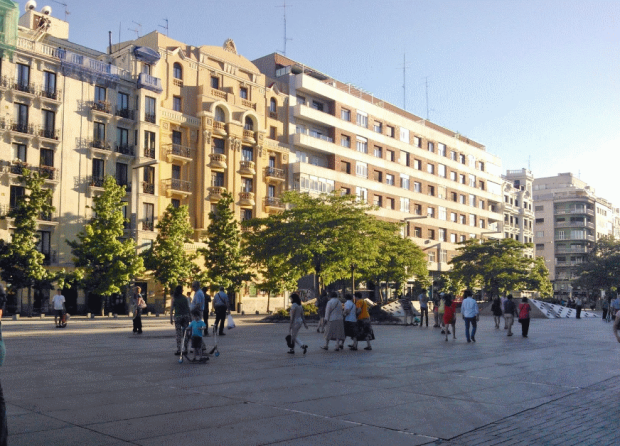 The trees over the parking slab

The western square as seen from the Dali sculpture. 50 m wide is really wide for pedestrians…