How to protect a scarce ressource as farmland from urban sprawl? Swiss are trying ir this way 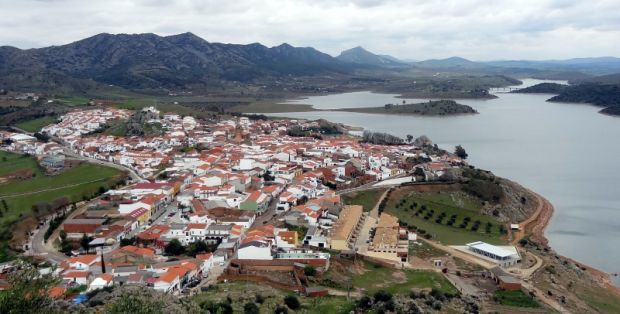 The upper image corresponds to the village of Alange, in the Spanish province of Badajoz. The dam was completed in 1992, with a wall 67 m high (from foundation) and 720 m long, so what until then was just a village over the Matachel river became a space marked by water and a new coastline. This is no doubt a project beyond the means of a small municipality, and was managed by the Guadiana Water Board. This action produces a new landscape that allows the use of water for irrigation (in lower lands there is a wide agrarian plain) and electricity production.

The reservoir has a catchment basin of 2.545 sq km (which is equivalent to 60% of Rhode Island), and its water surface, of some 35 sq km, is marked by some islands which display the geology of the area. The areas that were to be underwater were cleaned of all vegetation, so when the water level changes sometimes the shores look rather arid, in contrast with a much greener area of lands above water.

Water has brought relevant change; a neighborhood was moved as its precedent site was flooded, some new buildings respond to the new landscape, and it is fair to think that the payments to the owners of land taken to be submerged must have somehow influenced the local economy. There sure was an impact due to the flooding of the lower valley agrarian land, usually a fertile one. Over a stretch, the new layout of the road goes between the urban edge and the water, but its physical configuration is not very attractive. Water has become the central element of an area of the Natura 2000 European Nature considered a Relevant Birds Area; birds have become users of the reservoir. But people are becoming less relevant in number; there were 2.031 residents in 1996, and in 2014 this number fell to 1.946.

Somewhere in western Spain: the fruit trees on the foreground have clearly visible drip irrigation

Time to widen the scope: in a moment in which the border between urban and rural gets fuzzier in terms of social demands, at least in Europe, some things can start change in both spheres.

European laws (and others, but those in Europe are closer to me) institute citizen’s rights without making differences between those in rural and urban areas; citizenship, despite its etymologic link to cities, applies to everyone. But in fact the burden of transportation and communications implied differences in the aspirations of the residents of rural areas, which often saw the access to some services as almost impossible, and this was commonly accepted. During recent decades residents in rural areas have grasped better chances to access more services, first through cars, then TV, and then the internet; this has meant an evolution in their view of the urban life. It is still different to live in a small hamlet with 250 residents, half of which are over 60, but some things are now felt as rights in the same way in both kinds of territory. And the consumption habits get closer as the rural populations loses overall weight.  This is catalyzer of change on a scale that goes beyond urban or metropolitan, either for good or for bad.

Saying that cultivation fields get technician by the aim for more production can only be accepted if you speak in terms of millennia; improving crop yields has always been a goal for farmers, despite the bucolic vision some urbans have. There is a constant buzz now around the “developed countries” concerning smart cities and the future introduction of sensors, but this is also becoming common in many rural areas through improved irrigation systems. The image of circles formed by pivot irrigation are known to most of us, but drip irrigation, albeit less impressive when seen from above, is quite efficient, and the chances to mechanize recollection in some cases change many things.

Sure, urbans are not getting fans of the farm machinery websites, but it is rather the way in which farmers exchange information about their working tools, almost as any urban professional. When farmers look for ways to hack the on-board computers on their combine harvesters, as a recent article on Wired showed, change is in the air. I’m not sure how/whether this will translate to architecture and landscape, but chances are there could be an impact. And this is in fact an essay, reduced but interesting, on what comes along with smart cities; managing irrigation water and its electricity use is a limited goal, but some smart city initiatives don’t go beyond the mere management of a limited set of services… 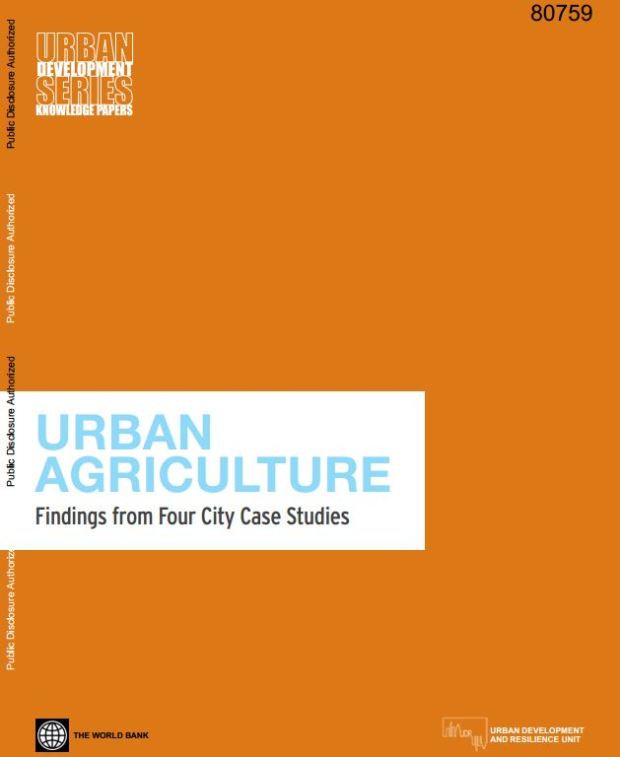 A report by the Urban Development and Resilience Unit of the World Bank, studying cases in Bangalore (India), Accra (Ghana), Nairobi (Kenya) and Lima (Peru). It seems that urban agriculture helps the first wave of migrants to cities, now old, to survive; it is also used by many as a complement to other sources of revenue, including informal jobs. Those urban farmers are usually the owners of the land they cultivate, and the reports sees reason to be optimistic about the development of this kind of agriculture.

This first example of 2015 is not really a map, but rather a rendering of an idea that has received an award in a competition for students held by the American Society of Landscape Architects. Its author, Reid Fellenbaum, proposes a strategy for the evolution of the central US plains, threatened by the gradual depletion of the aquifers that water its cereal crops. He summarizes the project as an evolution from the current Jeffersonian grid towards a more fine-grained arrangement in a land which is more fragile than it seems. I’m not talking about feasibility (which would be complex to judge in its entirety), even if it is clear that traditional cultivation techniques probably could provide some useful tricks, but rather about the graphical quality of the presentation, which is quite good.

Besides, this project addresses an issue, the “grain” of the land, on which I will soon write… widely.

A view of Rafaela from an airplane. Image by Martin Dario Herrera on Panoramio

Rafaela is a city with some 100.000 residents in the center-west of the province of Santa Fe, Argentina, with a certain structuring role over its territory. Ramona is a community slightly over 2.000 residents some 50 km west of Rafaela. Buenos Aires is faaaar awaaay… What is interesting here is how on a territory which is a perfect grid for the agrarian colonization of a Pampa that there surely seems infinite, there is a self-similarity worth a Mandelbrot explanation on the general layout… 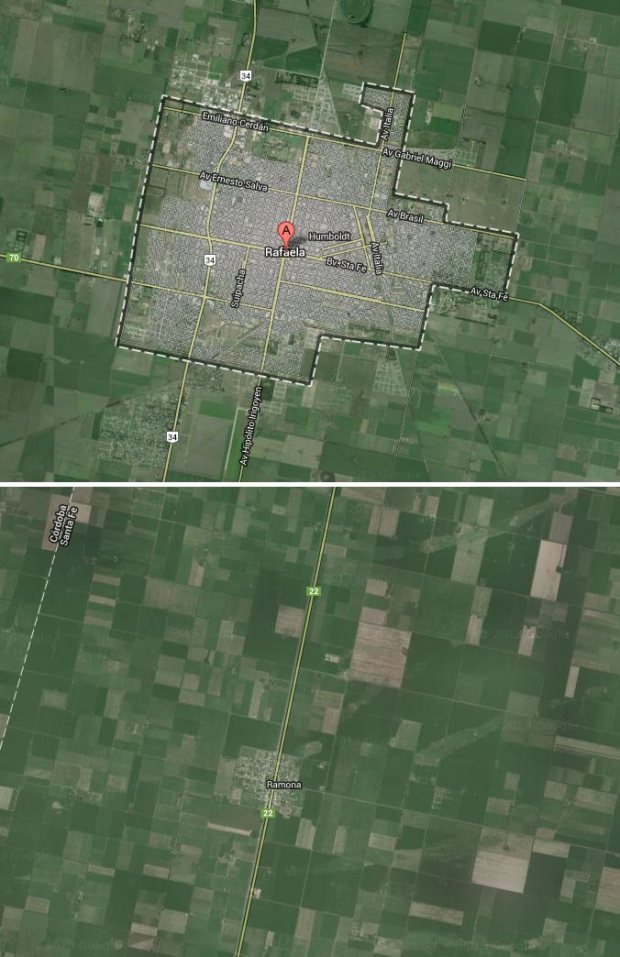 Rafaela and Ramona at the same scale. Attention, Ramona is located northwest from Rafaela

The Santa Caterina market (Barcelona) is a good place to give yourself a treat, be it food-related or architectural. According to a logic close to that of Madrid’s gourmet markets, close to the Cathedral, the Miralles- Tagliabue architecture is a must. 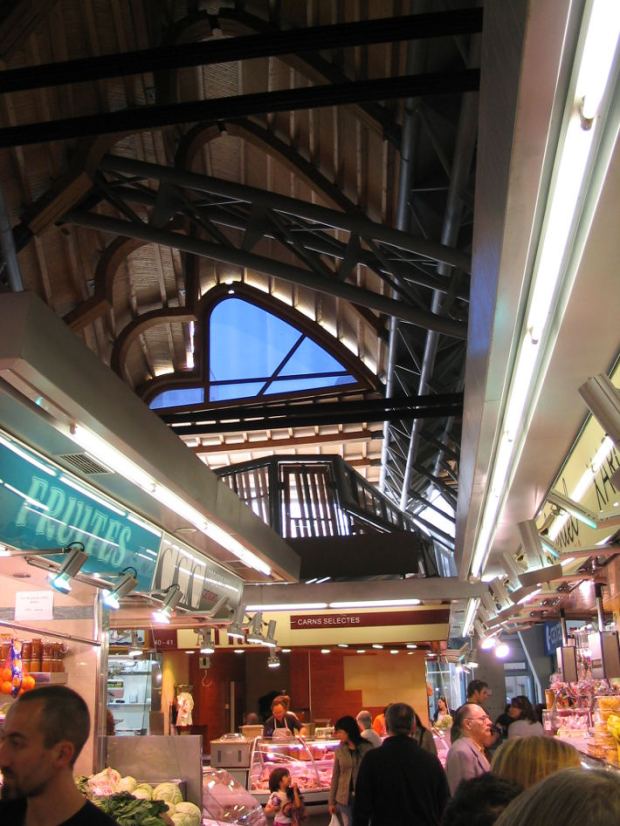 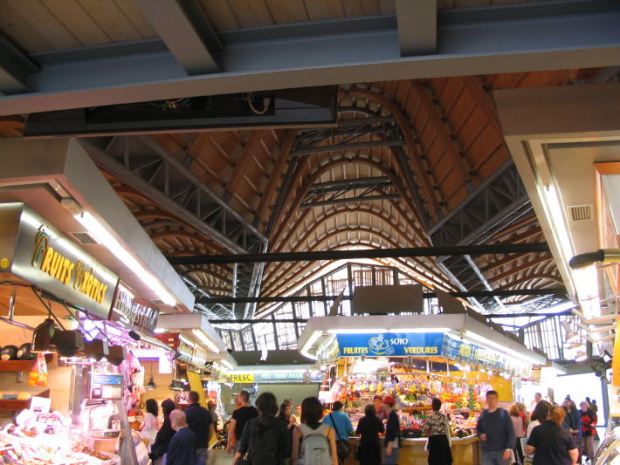 A night view of the Mercado de San Miguel

The city of Madrid has historically had a set of public markets into buildings; up to the 1980s these markets asumed a large part of the fresh food supply to the population, but the increase in car ownership rates and the rise of peripheral big box supermarkets stopped the creation of new markets and set for a decline in their use. But some five years ago the city decided that it would create a new market for the first time in decades as to ensure some variety in the new Ensanche de Vallecas (a vast new growth area in which there were no street level stores), and that it would revive markets through a double strategy: introducing in some of them mid-sized supermarkets that could improve the appeal to consumers and, for the San Miguel and San Antón markets, a refurbishment as gourmet temples (which now have to cope with a crisis that can reduce the demand for such products), in which the concern for local food was not the central issue (altough local products are promoted).

The Mercado de San Miguel is a building from 1916 with an iron structure, near the Plaza Mayor, which is developed on a single level. There is no large central space, as stalls are arranged along corridors, but the glass façades give a good view from the street of all things yummy to a steady flow of tourists visiting central Madrid.

The Mercado de San Anton was rebuilt, adopting a quite different approach: it is a multilevel market, with a floor allocated to food sales and the next ones used by theme restaurants around a central multilevel open space. If you visit, some of the most scenic are on the upper terrace, with views (albeit limited) over the Chueca roofs.

The gate to San Antón

The food sales floor, closed as the photo was taken out of the sales times

The restaurants level at San Antón

The open markets system in Paris is based on temporary ocupations of the public rights of way, mainly for food sales. The aim is to provide citizens with a choice of quality fresh food. There are 82 food markets in the city, with three bio markets. The opening times vary, and there are usually several markets open each day. According to studies by the  Institut d’Aménagement et Urbanisme de la Région Ile-de-France, there are more fishmongers and cheese sellers in the open air markets than in  conventional brick and mortar shops, as the products have better sales through this channel.

Markets are managed by firms that have concession contracts for six years terms, assuming the conduct of the business and renting sales positions to sellers, as well as basic services as electricity and water. They pay a right of use of public spaces to the city, as well as a quota to the municipal street cleaning service, an essential item for public hygiene and health.

Vegaviana is from 2009 a municipality in the province of Cáceres, in Spain. The settlement was created in 1954 as a new planned agrarian settlement, as a part of the internal colonization movement developed under the Franco Regime; large irrigation projects (in this case, linked to the Borbollón reservoir) were linked to these new agrarian towns. In 1961 there were 3.131 colonists, but today population is 863, as the area is subject to the same demographic trends that mark most of rural Spain.

The architectural project, by Fernandez del Amo, was awarded, and as in most of these colonization settlements the humble architecture is well integrated in the landscape. It is usually the opposite to a golf course, as here productive land must be preserved as the reason for the urban tissue. 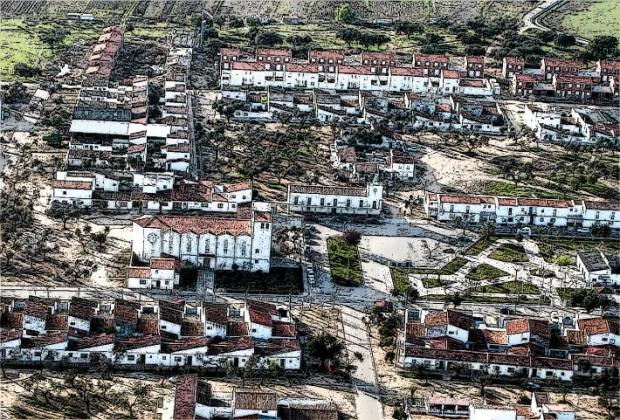