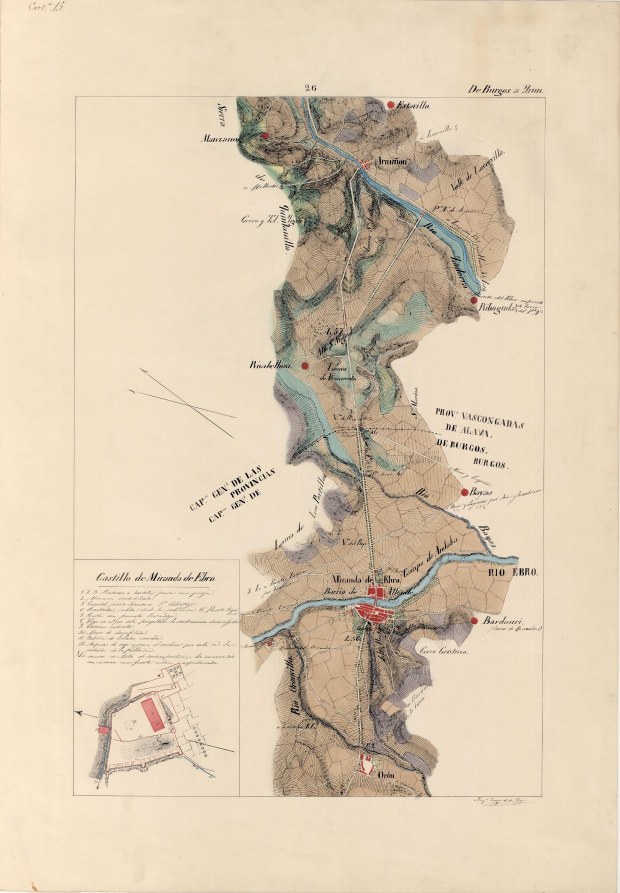 The map of the Madrid- Irún trail of 1849, conserved at the archive for cartography and geographic studies of the Geographic Center of the Spanish Army, describes in detail the travel between both cities. The use of contour lines was already common at the time, but here the land elevation is described in a more picturesque way, albeit an eloquent one. A map with a simple graphical style, but an elegant one.

Pamplona in XVIIth century. The map can be consulted on gallica.bnf.fr, signature GED-4683

Pamplona is an example of what happened in most of the Spanish cities during the XIXth century. The wall is demolished for most of its area. Here it still exists on the western flank and in the southwest citadel; it still exists also in the area facing the river, as there were no growth pressures there. A wide connection avenue with the Ensanche was created.

The wall facing the river

Plan des Forteresse de Vallete, bourg et sangle de Malte… H Boulange fe. 1645. An engraving representing the city in the XVIIth century, that can be found on gallica.bnf.fr with the signature GE C2362

Coming from Spain Valleta is an interesting city; during the XIXth century most of the Spanish cities demolished their walls to create ensanches, urban extensions with regular layouts in continuity with the old cities. But in Valleta they have had both the city walls remaining in place and the urban extensions, which have managed to fit between bastions. The 1645 view shows the situation of the old city and a prevision for an extension towards the hinterland which has been built.

No doubt, the role of Malta in the Mediterranean, as an island with clear geostrategic qualities (just think of the “unsinkable aircraft carrier” of the British during WWII) has led to a lesser priority to destroy fortifications as compared to other regions. It is a wonderful place to see renaissance and baroque urban fortresses, and a city from the same moments which is well conserved and extremely attractive for photography. 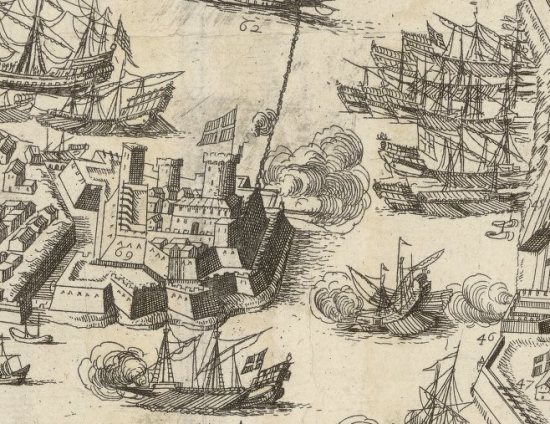 St Angel Castle in the 1645 engraving 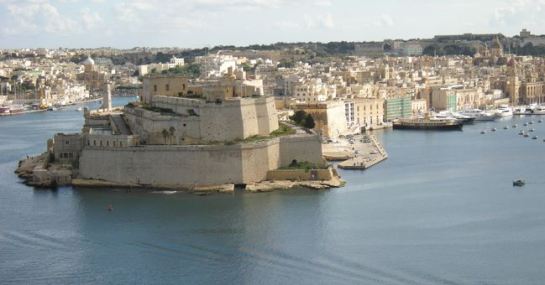 What was to become the “new city”, today’s Floriana

The main gate to the old city from Floriana. You can notice the deep moat, and the much more recent gate

A view of the eastern coast of the main penninsula 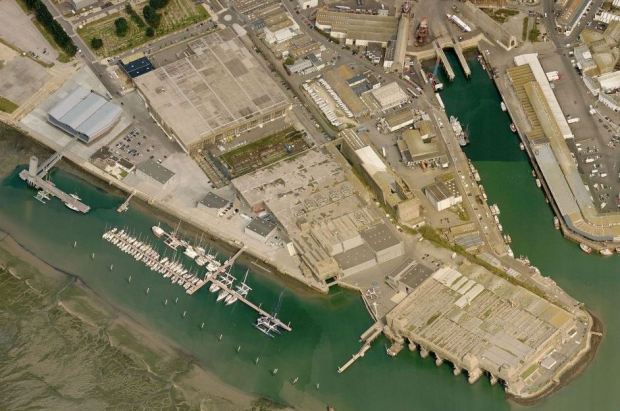 How do you organize in a hurry an innovative defensive system? Through trial and error… When Germany invades France in 1940, the Atlantic coast becomes a choice location to base the submarines that should suffocate Britain. Among the ports used was Lorient, in Brittany.

The base is built by the estuary, out of the city. WWI had seen submarines, but their role was more relevant during WWII. The base is configured as an array of individual hangars for each submarine, forming concrete pods whose walls and roofs had thicknesses measurable in meters, in two parallel rows, with rails in the center to move submarines towards the lock connecting the system to the sea. Like in a modern parking, with individual slots for each ship… but for the fact that a submarine is anything but “automobile” out of the water. The system was substituted on the next stage by individual “pods” for each submarine at sea level, so each ship could get in and out easily. 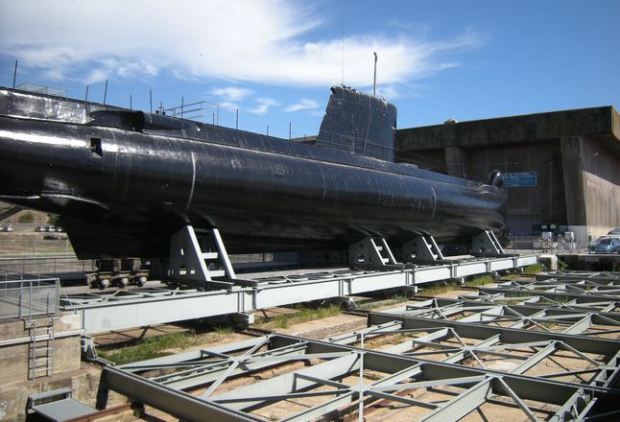 The name has been used with some frequency, and after 1940 it has been often mentioned in unfavorable terms. Some people say military strategists are always a war behind real events, and the Maginot line is often invoked as a proof.

Vauban invented for Louis XIV the concept of “Pré Carré”, a safe national space protected by border forts. When the Maginot line was conceived the horrors of WWI were still recent; a conflict in which the stabilization of fronts for years led to a complete destruction of woods, cities and people. The idea of a static war was the argument supporting the most sophisticated trench, as to ensure a total block from Switzerland to the sea, regardless of the landscape or territory in each section. But this territorial fortification was overwhelmed by a completely different form of war, which also had advocates in France (a certain Charles de Gaulle), but one for which the army was not ready.

After the war, this large trench, with its many bunkers, was perceived for some time as an asset for a different kind of war: bunkers could be used for a nuclear war, according to some, but finally NATO saw no use in it. The forts were sold to civilians from the 1970s

Despite the exhaustive aspect of the layout, I have seen no reference to border cities; I suppose they were protected by the fortifications, and urban planning was almost none at that time. 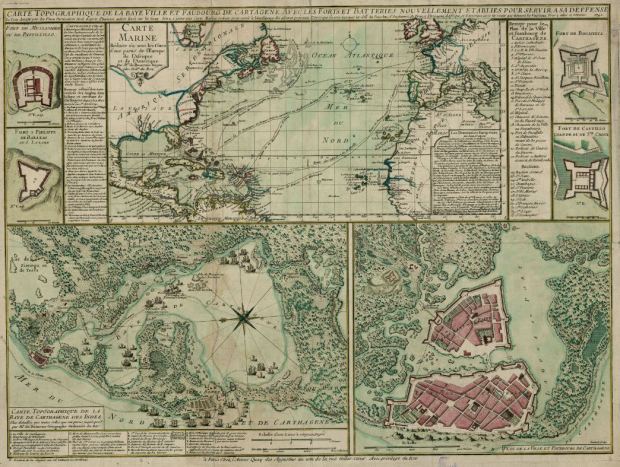 You can measure the relevance of a fortified city by the attention given by the ennemy. Judge yourself by seeing this fine classical french map, available at the Biblioteca Digital Hispánica

Cartagena de Indias was established in 1533, becoming a relevant port for the slave trade of the Spanish Crown in the Caribean sea (in a route in which Portobelo in Panamá was the main exchange point of slaves for Peruvian gold and silver, and Havana was the gate to the Caribean sea). The city was subject to siege several times (the first in 1544), mainly by French and English pirates, and fortified by Spanish and Italian engineers with an african workforce. 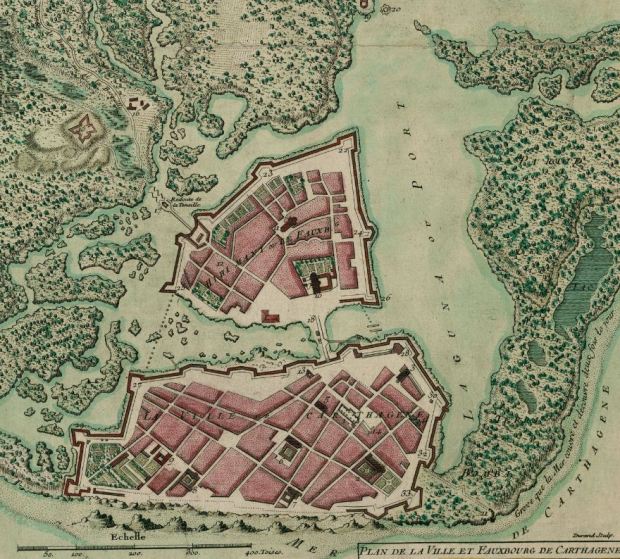 The walls, whose cost to the crown was widely commented, still exist for the most part, as well as some forts around, as the San Felipe de Barajas Castle. The two main islands are today united, and the colonial architecture can still be seen, mixed with more recent elements. When you compare the old map with the current image, please note that the former represents the west in the lower part of the image.

I just finished two weeks ago “Victus:  Barcelona 1714”, a recent book by Albert Sánchez Piñol on the Siege of Barcelona during the Spanish Sucesion War. It makes a good read, and it is also a good introduction to poliorcetics, or the art of siege warfare as conducted during the Enlightment.

What was in the mind of one of the brightest minds in poliorcetics, Vauban?. Just read his Oisivités on Gallica and you will get an idea. As for me, this week I will talk about how this has influenced city making…