By the Musée d’Orsay 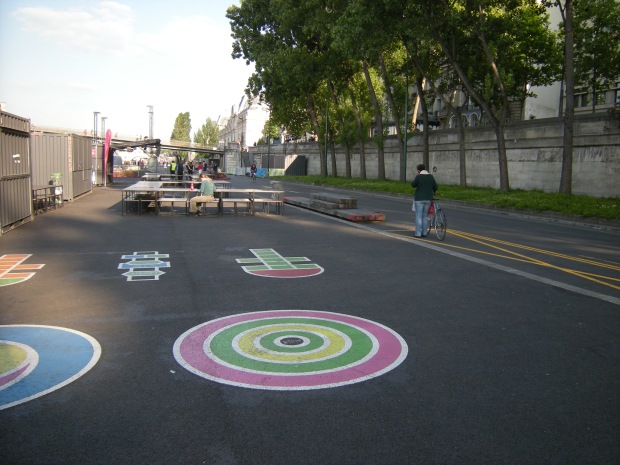 Between Concorde and Pont Alexandre III

The Municipality of Paris has closed to traffic a part of the embankment on the Seine that had been used as a freeway during the second half of the XXth century. This can be ascribed to a drive to limit the use of the car that originates in European rules on air quality and a fight against traffic congestion that was shared by the two main options in the recent municipal election. The Parisian solution has been almost the opposite of what Madrid did facing what seemed an identical problem.

Madrid has chosen to bury the freeway under its former site, creating a new public space project on a much larger scope. Paris has not substituted the eliminated car space, and the asphalt has not been removed; it has become a platform for varying uses, as a tv set in some way. The cost is much lower, and the use more flexible. Doubts can rise on whether this is a more or less ambitious scheme, but it seems more sustainable.

A project as the one in Madrid would have been far too complex, among other reasons due to the cross section, which in Paris maintains the traditional embankment walls (essential in case of flood, a problem tackled in Madrid with a preexisting upstream reservoir), and on the higher level the conventional traffic goes on as usual.

There is also a historical dimension, on how the “urban prosthetics” end up reconfiguring the city. In Paris as well as in Madrid, these fluvial freeways appeared when the city was already present on both sides; but in Paris it was the historical core of the city around the corridor, while in Madrid the Manzanares shores were recent tissues of scarce urban quality, so the freeway was located with a rather savage approach. In Madrid the freeway was the street on which the entrance halls to the apartment buildings opened, and burying the freeway has given for sure a substantial reduction in noise; in Paris, cars still run over the higher parts of the embankments.

This is a matter of choice between closed (and expensive models) that try to deliver substantial transformation (and a compromise, trying to entice the car-loving voters…) and more flexible models that try to address a more complex problem, including historical heritage and flood risk, with chances for incremental change.

Conserving asphalt (as it has been done in the car-less embankment in Paris) doesn’t seem a bad solution. Sure, as the 1968 revolutionaries said, the beach is under the paving stones, but on asphalt things can actually happen.

Gran Vía: 1,3 km (slightly less than a mile) of central street cut through central Madrid from 1910. Not unlike Picadilly Circus/Regent street in London, or Times Square in New York

The Gran Vía is to central Madrid, since its inception in 1910, what the boulevards were for Haussmann’s Paris: a large cut through its old urban tissue. But here it is an isolated case. With an irregular plan, it is the moment in which a Spain that had lost the 1898 war against the United States tries to rebuild its image taking America as a reference.

An icon of modernity in the post-war years, since the 1980s it entered in a decay dynamic, which began to be reversed since the late 1990s, in parallel to a sizeable work on the public space. The closure to motor traffic of the Plaza de Callao and the calle Montera allowed an increase of pedestrian spaces, reinforcing the strongest retail area in the city.

Callao in 2009 (left) and in 2006 (right). One of the busiest walkways in Madrid becomes a grand pedestrian esplanade

Gran Vía, as seen from the capitol building on a winter day. Cars occupy most of the space, altough walkways are wide (8 meters in many sections)

Right side of the previous image. Some urban furniture elements are perharps a bit to bulky; besides, Madrid could use a system similar to that of London, with underground entrances integrated into buildings, to free the sidewalks (altough in this case the problem is limited), but it is something quite dificult to do in an existing city.

The left part of the wide image. The sidewalk cafes can be seen, as well as the new granite paving and the pedestrian barrier. 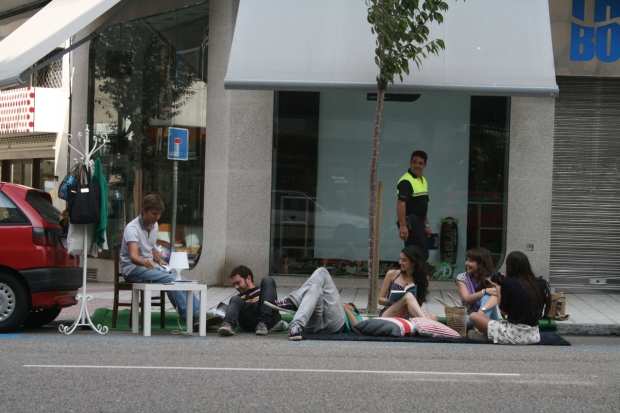 Parking Day is an annual worldwide event where artists, designers and citizens transform metered parking spots into temporary public parks.  It is presented as an open source event. Conceived by Rebar, a San Francisco based design studio, its aim is to raise awareness about the amount of public space used by cars. The idea is simple: once you have paid in the parcmeter, you have a right to use the space for a given time, and it is only up to you to decide whether you want to use it to leave a car of other use.

In 2012 it was yesterday, 21 September. Since the first time in San Francisco, and according to the manual, metered parking has hosted wedding ceremonies, worm composting demos, public parks, free health care clinics, glass recycling, political campaigns,  public kiddie pools, and all sorts of uses. There is also a manifesto. In some american cities, as in Philadelphia, it is becoming a relevant movement.