The Danube near Vienna, as seen from Khalenberg Hill

For those that have followed this blog during the last years, here is the proof it has not disappeared. Just a small fraction of that time was a break (most of it was quite the opposite…), but it was worth it.

During that time I have seen and thought about some interesting things, either on travel or through other means. Here are some, which can be viewed as a thematic layout of future posts:

When Môrice Leroux, a disciple of Tony Garnier, builds between 1927 and 1934 his “gratte-ciel” (literally “sky-scrapers”) he defines rules that are in Sharp contrast to the surrounding areas.

Take land cover maps, change public transportation for car infrastructure, and but for appeased traffic zones it is sometimes not that easy to recognize the iconic image of Europe.

Urban core maps of Lyon and Pittsburgh at the same scale. Lot area in sq m for Lyon and sq ft for Pittsburgh (I’m perfectly aware that 10 sq ft are not a sq m, but it is close enough to guide you all, brave subjects of the imperial system… and also us, metrics, with significatly similar magnitudes)

That’s the kind of comment that usually rises a few (malevolent) smiles: size matters. When talking about lot area (relevant as it defines the size of the buildings in plan, and so the urban image), these two cities that have so much in common in “social size” (population at different scales, albeit on rather different physical footprints), show a thing or two. Lyon’s parcels are rather fine when compared with central Pittsburgh, a more recent city in which corporate headquarters and such american features as open air parking (sure, less pervasive than in Houston) change the city. Therefore, a clear difference in “resolution” exists, besides the evident difference in architecture. 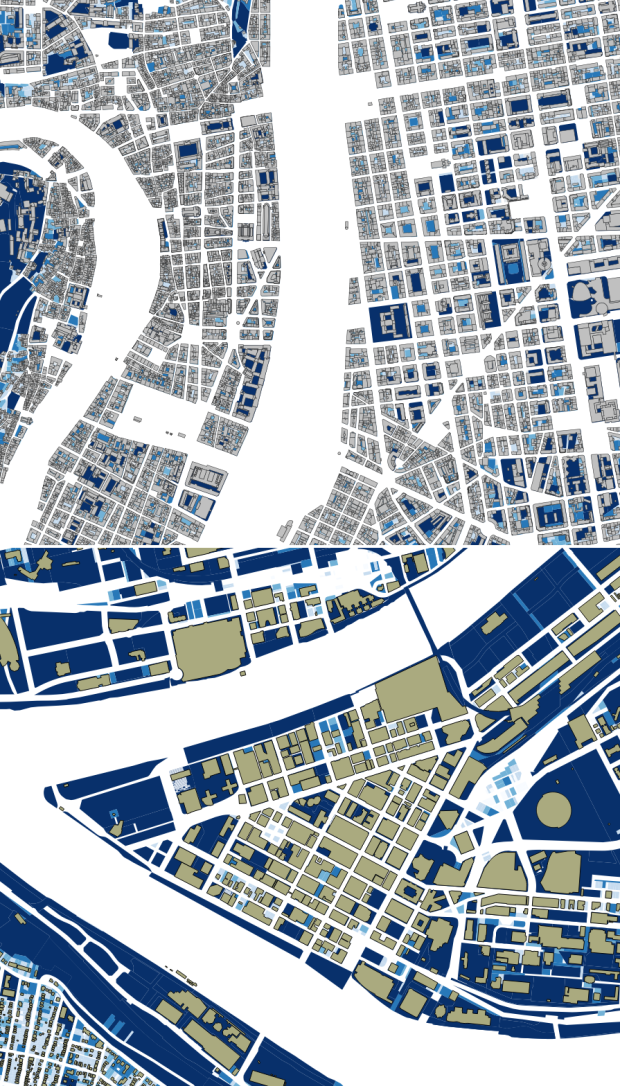 Building footprints on the urban cores of Lyon and Pittsburgh

Add buildings, and despite the fact that the cartographic layers seem to have different criteria (we use what we find…), there are relevant similitudes but a clear differnce: the concept of courtyard, much more present (or so it seems) in Lyon. 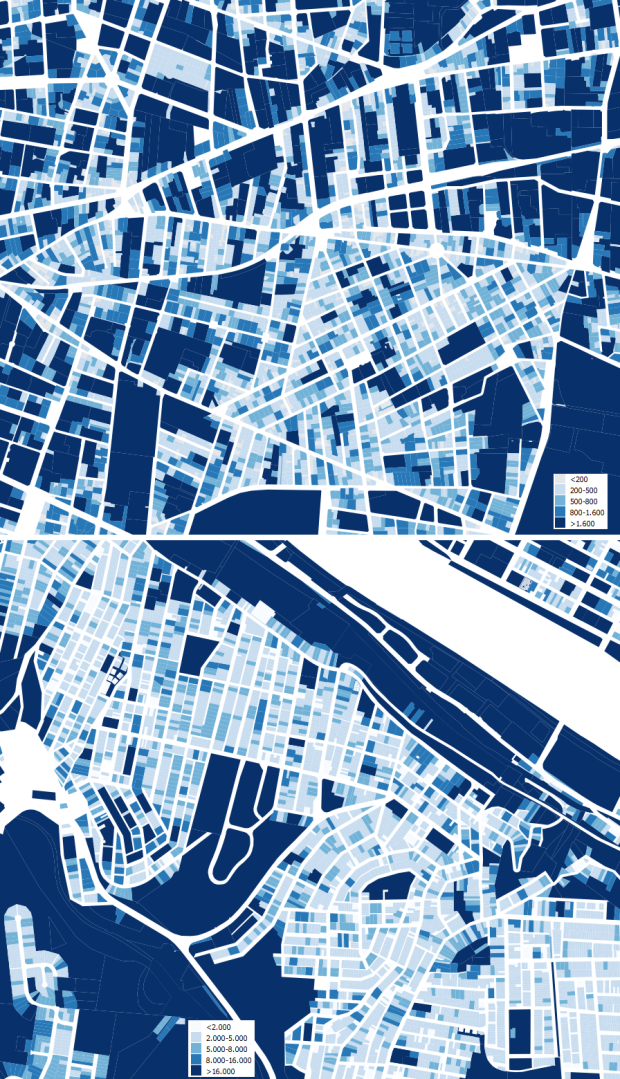 Same scale maps of neighboorhoods near the urban cores: Montchat in Lyon and Mt Washington in Pittsburgh.

Enter the neighborhoods near the core, but clearly out of it, and things change: the power of the American low density suburb appears. There are also individual homes in Lyon, but there are also appartments, that change the issue. Monotony against clutter? two kinds of clutter? add the buildings, and the European image becomes more complex. I would like to think it is also more sustainable… 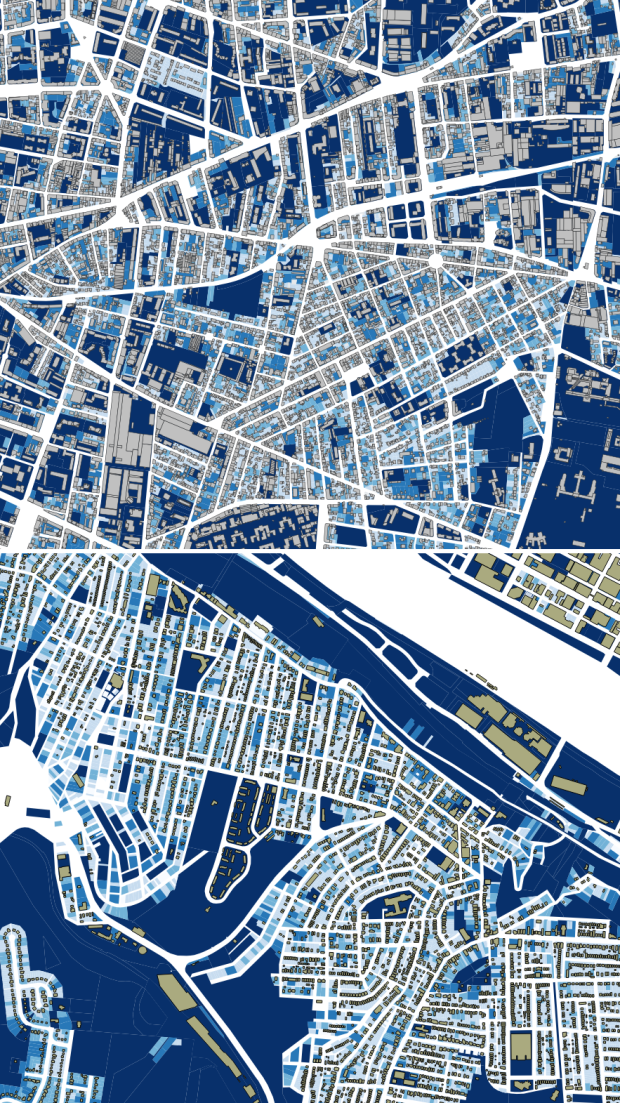 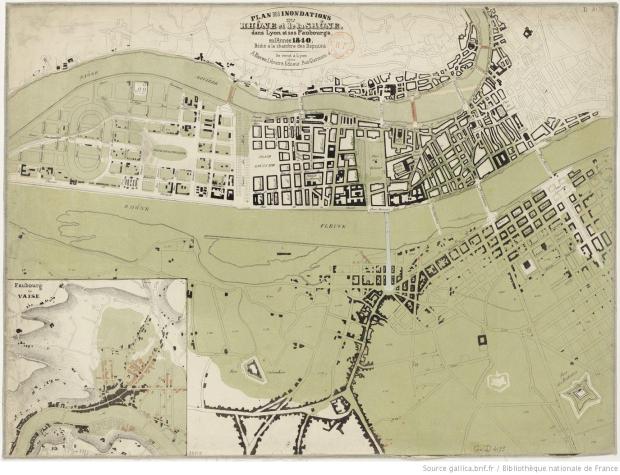 The French city of Lyon has many reasons to catch your attention: its setting between two rivers that pretend not wanting to join their waters, so creating a long peninsula that has become the urban center, its hills giving you good views even of the Alps, some 100 kms away, and an ordered urban planning. You can also mention food, while you are…

The historical core is on the Fourviere area, on the Saone banks, and has expanded to the east. Th 1764 plan by Jean Antoine Morand shows a vision of the consolidation of the city on the river crossing. The junction of the Rhone and the Saone, whose position has changed over the centuries due to the fluvial dynamics and canalization works, has been until recent dates a haphazard suburb with industrial and rail uses.

In 2003 the City of Lyon launches the urban renewal operation, aiming to configure a space with a high quality of life, affordable housing, mixed uses and cultural activities, and the seat of the Rhône-Alpes Regional Government.

The project area covers 150 hectares, 70 of which correspond to lots and 35 to public spaces. The area is to reach a 16.000 population with 25.000 jobs, including high energy efficiency buildings and a reduced water use. Any part of the operation is less than 400 m from water and a public transit stop. The flood risk is reduced by minimizing the soil paving (less on-street parking, grass planted public spaces) and through a design that includes canals.

Public spaces and buildings have been designed with water and built heritage in mind.

You can get more information at www.lyon-confluence.fr